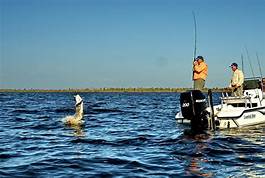 Three people from Teesside have been fined a total of almost £1,500 after Environment Agency officers on Bank Holiday boat patrol with Cleveland Police caught them fishing illegally.

Maria Blyth, 30, and Adam Wakefield, 33, of Newtown Avenue in Stockton, were both fined a total of £270 and ordered to pay costs of £127.47 and a victim surcharge of £30 for fishing without a licence, fishing during the coarse fishing close season, and using bait prohibited during the close season.

In a separate case Thomas Stocker, 25, of Laurel Road in Stockton, was fined £440 and ordered to pay costs of £127.47 and a victim surcharge of £30 for fishing during the coarse fishing close season, and using bait prohibited during the close season.

Their cases were demonstrated in their nonappearance at Hull Magistrates’ Court on 9 August. On Bank Holiday end of the week, Environment Agency Fisheries Enforcement Officers were on watercraft watch with Cleveland Police on the River Tees, upstream of the Tees Barrage, when they saw Blyth and Wakefield angling at Bowesfield. Stocker was fishing separately on the same stretch of river.The fishing close season prevents fishing for coarse fish for 3 months to give the fish a chance to breed. It runs from 15 March to 15 June inclusive.David Shears, from the Environment Agency’s Fisheries Enforcement Team in the North East, said:

These boat patrols are part of the regular partnership conducted in partnership with the police to combat both rural and urban fisheries and other environmental crime. Combining forces in this way allows us to target crime effectively and efficiently in locations where land-based patrols don’t allow for easy access. The Competition Market Authority is out to take action to catch offenders.