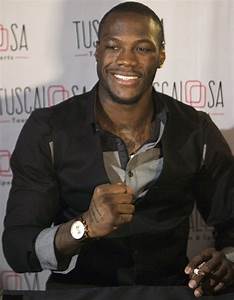 Deontey Wilder’s management  team has upped their criticism of Joshua’s promoter, Eddie Hearns, saying that the London heavyweight world champion’s promoter is ”playing the press like suckers”. our source who has insisted on anonymity, insists  Hearns knows the money is real, but is playing games with the British  press. Sports Matchroom  boss, Eddie Hearns will definitely reject the assertion.

With our source being a member of  management team, they he insisted on anonymity giving the continuation of  drawn out negotiations on a fight the boxing world is itching to see. The tension between both camps has long been tense, but with the hope of eventually getting a deal done, none of the team is looking for a direct personal confrontation with Hearns in order not to scupper the potential of the fight being made. However, our source said Hearns was be unreasonable in refusing to accept the offer before coming to the negotiating table- a meeting they say does not have to be face to face.

‘Look, when they offered us  money to fight Dillian Whyte, we didn’t question the money or ask them to show us. We just told them it was Joshua we wanted. This should be a simple thing. We have offered  Joshua $50m to take the fight. It’s a guaranteed $50m, how can they say the money is not real”?

Deontey Wilder last week made Anthony Joshua a $50m offer to face the American later this year at a venue of his(Wilder) choosing and without a rematch clause forming part of the deal.  The rest of the terms, they say, can be discussed during negotiations. However, Wilder’s team have asked Hearns and Joshua to first accept the deal before proceeding to the finer details, which would be subject to ongoing negotiations.

Speaking to The Eye Of Media.Com about the fight, our source said:

”Al Haymon has been involved in the biggest revenue generating boxing matches in the history of the sport. Why would he allow a phony offered to be sent to Eddie? Did Pacquiao get his money after the Mayweather fight? Did Conor McGregor get his money after his fight with Mayweather? Why don’t you call them to ask them whether Haymon lived up to his word and whether the money was real?

” If the fight generates $1, AJ still gets $50 million. Once they start negotiating, the letters of credit will tell Eddie exactly where the $50 million is coming from. He’s playing you guys for suckers, because you don’t understand how any of this works”,our source said.

He continued: ”It’s like I’m selling my car, here’s the price. You agree to buy the car, but before we consummate the deal and you give me any money, you have some questions. Ask away. You don’t like the fact that it doesn’t have an engine. No deal. You walk away. You agreed to buy the car at my price, we negotiated, you asked your questions, but you never signed anything after finding out it didn’t have an engine. We can keep negotiating if you like or you can walk away. Nothing is binding”.

Sounds simple. So why won’t Hearns accept the offer?  ” We can’t agree a deal until we have a dozen very important questions answered,” Hearn told Sky  Sports News on Monday.

“I’m thinking about making a counterproposal this week.

“I will go back with some very simple questions, which hopefully they can answer, to put us in a position to know whether it is worth talking.”I have spoken to AJ multiple times – he wants this fight. Wilder wants this fight.”I work for Joshua, he is my boss! If he tells me to make a fight, it is my job to make the fight”.

Our source  told The Eye Of Media.Com: ” you don’t have to meet to strike a deal.  It can all be done through emails.   All he has done is make excuses for not accepting a simple offer.  Our source also believes  Hearns  should not be questioning the existence of the $50m. He points to the fact that Al Haymon has been involved in the biggest revenue generating boxing matches in the history of the sport. Why would he allow a phony offered to be sent to Eddie? Did Pacquiao get his money after the Mayweather fight? Did Conor McGregor get his money after his fight with Mayweather?

The boxing world is watching with intrigue and suspense as the biggest heavyweight fight in boxing history undergoes a seeming impasse one would expect to be penetrable. A straight $50m offer is a no brainer, but it comes with potential implications for Eddie Hearns, Joshua’s promoter.

LEGITIMATE
If the offer is as legitimate as it appears to be, it would effectively mean Hearns has been bought out. Hearns has stressed his interest in staging the fight in the UK, but Wilder’s team have already said the American will choose the venue of the fight under the arrangement of their offer. This could be a sticky point, but at the moment,  the problem is that Wilder’s team want Hearns to just accept the $50m, but Hearns doesn’t want to do that until he has discussed the comprehensive details of the deal.

Eddie Hearns told the UK press on Monday that a new offer was being prepared for Wilder’s team which would be an improvement of the first offer. At the time of publication, Wilder’s team had not received the new offer. Hearns might be working on its finest details in his bid to secure the most rewarding deal for Joshua and Sports Matchroom, but whether the deal will be accepted will hinge on the perception Wilder’s team have of it.

Making a fight of this magnitude should not be this difficult, but it is challenging for both camps at the moment. Both parties want to get the best out of the fight, and a compromise of some sort will eventually have to be made.

ANTICIPATION
The prolonged talks will no doubt raise the anticipation for a fight that must eventually materialize, and seems to be implicitly anchored on who can really pull the financial strings for a most lucrative fight with far-reaching career and historic implications for both the winner and the looser. Whatever the seeming intricacies of making this fight, there will always be a final answer. The question is not if, but when? The psychological effects of the process that culminates in the eventual negotiations could even impact the climate and intensity of the fight.
This appears to be both a battle of minds and power, the latter of which is the object of a fight this big.