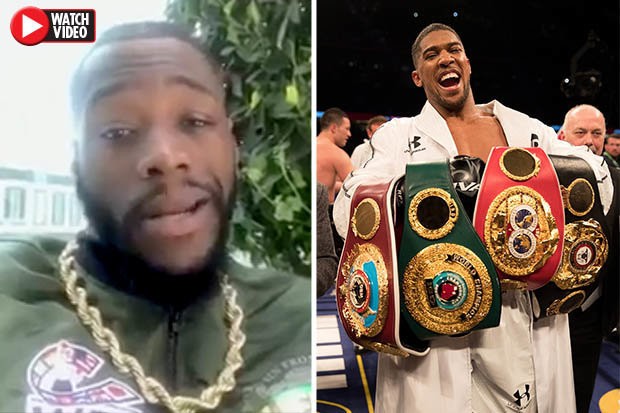 It is a 50-50 split in marked contrast with the less than 40% offer initially made by Joshua’s team to Wilder.

The offer comes following a previously stalemate position between Joshua and Wilder’s team, after the American’s camp rejected an initial offer of $12.8, (8.8m). Wilder’s team earlier in the week told The Eye Of Media.Com that Hearns was never serious about pitting his man with the American WBC champion, currently undefeated in 40 fights, with 39 of them coming by way of knock out.

Eddie Hearns and his media relations man, Anthony Lever, flew out to Newyork to explore a solution to the deadlock in talks.

The provisional offer made by Wilder can be seen as a serious expression of interest by the American to fight Britain’s heavyweight sensation. Wilder hopes to wrest from Anthony Joshua all the four belts he has acquired in his illustrious professional career of just 21 fights.

The American said in a youtube post: “All the money is in the bag so I expect you will be a man of your word”. Joshua immediately accepted the offer on instagram, saying he would accept a £50m offer. However, the precise offer is $50m not £50m, but the difference is relatively negligible.

The offer contains no rematch clause and will be poised to take place between September and December this year, though fans will expect it to be nearer September than December. With the biggest fight in heavyweight boxing history looking close to secure, it will put Wilder in the driving seat if the American gets his way on choosing the location of the fight as stipulated under the expressed terms of his offer. Eddie Hearns has always derided Wilder’s pulling power, insisting that the unbeaten WBC champion’s quest for higher than the $12.5m(£8.8m) initially offered was tantamount to a request to be overpaid.

One potential but an insignificant challenge to an arrangement for the pair to meet is the fact the WBA has ordered Joshua to enter into negotiations with mandatory challenger Alexander Povetkin. Notwithstanding, WBA chiefs are willing to bypass that order to see the biggest heavyweight fight staged between Anthony Joshua and Deontey Wilder.

Wilder added: “Tell Eddie Hearn to let you personally check his email this time. By the way, I sent your manager Rob McCracken the email as well.

“I am looking forward to our meeting in the ring.”

Joshua’s team have until midnight today, Thursday to accept the offer or make modifications to it. If the fight is finally made, it will be the most dangerous fight for each of the two heavyweights to date, with very high stakes attached to it.