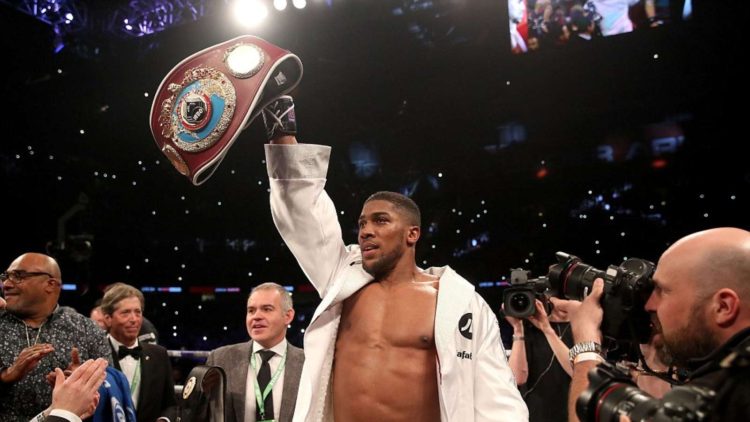 Anthony Joshua delighted an audience at an event hosted by StubHub for Steel Warriors – a charity that melts down confiscated and surrendered weapons to help construct outdoor parks.

At the event, the four belts heavyweight champion took time to reflect on the past history of the street crime he overcame before he became a boxer. Joshua pleaded guilty to possession with intent to supply a class B drug – an incident that almost ended his boxing career.

Anthony Joshua told his audience how close he was to throw it all away after mixing with the wrong crowd and getting in trouble with the police.
He said: “My interpretation was never to be Mike Tyson or Muhammad Ali, it was just to benefit myself.

“I used to smoke when I was younger, obviously party and drink.

“We used to go out and get the White Ace –you know when you’re in the line [for a club] trying to get drunk before you get in.”

Joshua spoke of the transition he made from living like a street criminal to a disciplined lifestyle of healthy living
He revealed: “I started cutting back – I learnt the benefits of eating healthy and started putting on a bit of weight.

“And then my mind started to work better and I started looking in the mirror more.

“I realized that when I used to fight on the streets, I got arrested – but in the ring people are clapping.

“I thought this is crazy.

“So I started to think I need to weigh it up – I can be the bad boy from the estate or a good guy boxer.

Weighing it up for Joshua meant becoming a disciplined amateur, which eventually led him to the London 2012 Olympics.

Joshua went on went to win gold in the super-heavyweight division at the 2012 Olympics and took two years before deciding to turn professional. After beating unbeaten Joseph Parker in March, last month, he won the WBA, IBF, WBO and IBO belts. He had already won the IBF belt by knocking out Charles Martin, before getting the WBA and the IBF from Wladimir Klitschko in 2017.

Joshua’s team are now aiming to fight Deontay Wilder, and have made his team a £12.8 m for the biggest fight in the heavyweight history. Wilder’s team want more money for the fight, meaning that negotiations will drag on longer. A fight between the pair would fetch an estimated £50m, with tv companies cashing as well.

Camps of both men are due to meet in America next week to negotiate further, in the meantime, WBA no 1, Alexander Povetkin, is mandatory for his shot at Joshua. If Joshua and Wilder agree on a deal in the next week or so, Povetkin will likely be paid step aside money.