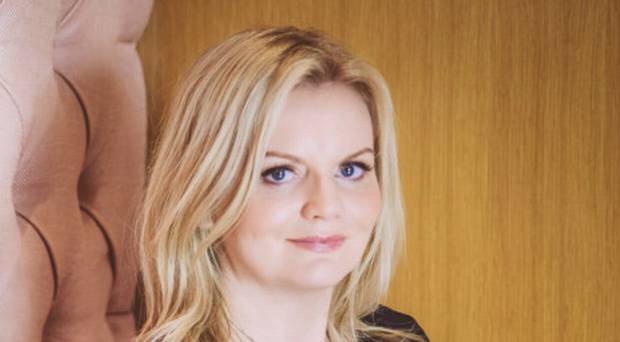 A Belfast entrepreneur whose experiences during pregnancy inspired her to set up her own business, is launching a campaign to encourage new parents to download a free app she has developed to help them check their mental health.

CEO and founder of Moment Health, Nuala Murphy, hopes her #CheckYourSymptoms campaign will help new parents deal with the anxieties that they may have but not realize.
The tech entrepreneur, who is also the founder of Lean in Belfast,  self-funded her start up before landing an  early stage investment from techstart NI last May.
Over the next two years she hopes that Moment Health will provide a mental healthcare service to parents, partners, re sellers and health trusts.

We launched our app in the UK and Ireland in November and we’ve already had thousands of downloads.

“We were rated the number one app for health and fitness on AppAnnie, an independent reviewer, the week that we launched so we were really delighted with that.”

“Some 70 per cent of new mums aren’t aware they are suffering from maternal mental health and related issues so at Moment Health we are launching our #CheckYourSymptoms campaign in order to appeal to mums to acknowledge they could be suffering and to speak up, seek help and ultimately save their life.

“This is a global issue. And that’s why we have developed the #CheckYourSymptoms campaign so new and expectant parents can download the app and check their symptoms to prioritize their mental health at this crucial time and ultimately catch any issues early so they can be recognized and treated.”
The tech entrepreneur will be launching her campaign during Maternal Mental Health Awareness Week which runs until May 5th. Murphy’s developed her app is available on iOS and Android .

Murphy hopes new parents will use her technology to track their moods and check for symptoms.Checking mental health against its known symptoms can empower sufferers to effectively address it.
Ms Murphy told The Eye Of Media.Com:

We launched our app in the UK and Ireland in November and we’ve already had thousands of downloads.

“We were rated the number one app for health and fitness on AppAnnie, an independent reviewer, the week that we launched so we were really delighted with that.”

“They can do so with the confidence that the app, which has been developed with the help of clinicians and medical professionals, uses evidence-based screening tools.”
“We all know new mums and dads – so we all have the power to look out for new parents around us, to ask them if they are okay, to let them know they are not alone, to remind them if they are struggling that it is nothing to be ashamed of,” Ms Murphy said.

The technological development is a bright one which should have numerous benefits to those with mental health issues.