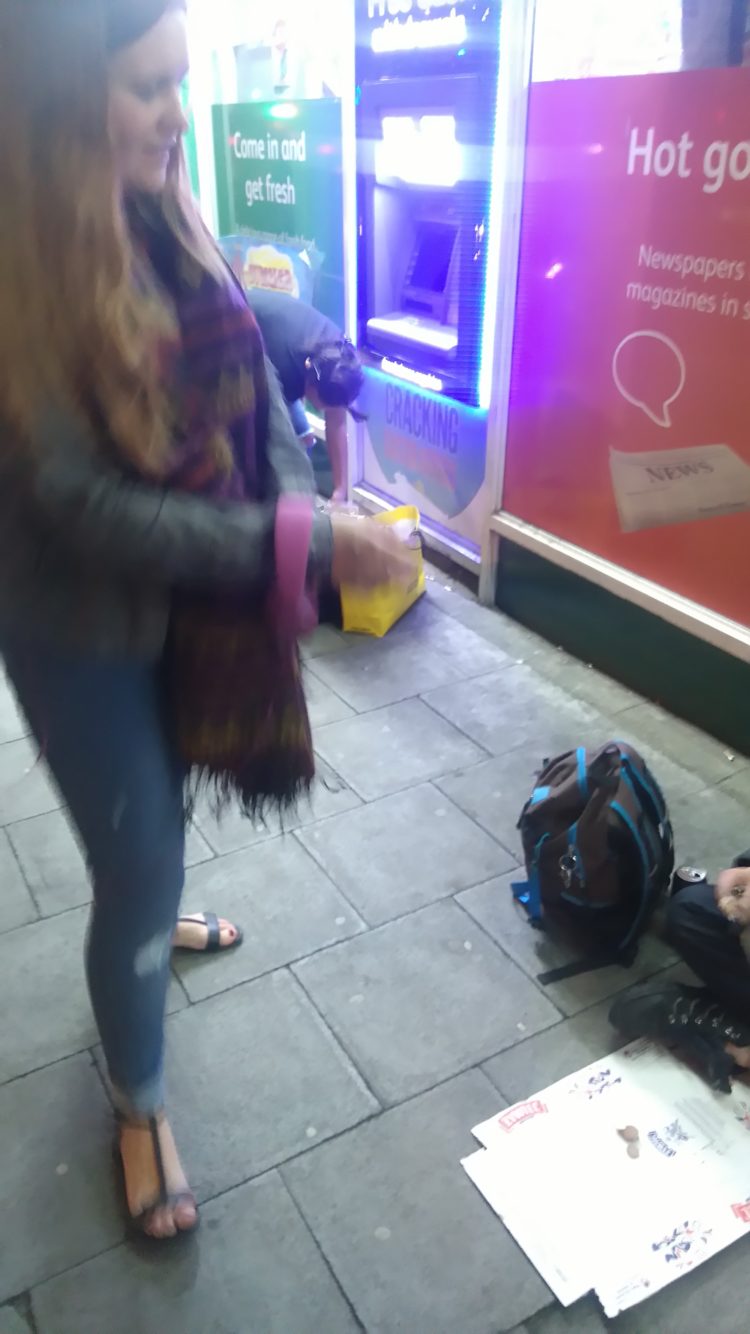 Good samaritan, Mollie Sherrington admirably buys food for a seemingly homeless drug addict on the streets of Southend. The eye of media.com spent some time looking further into the unthinkable arson that killed a 30 year old pregnant woman a few days ago in a crime that made national headlines here in the UK.

It was a pleasant sight to see the carer for disabled people respond to a request for money by the man, known as Dave, by offering to buy him a sand witch instead of money. He accepted her offer, and she strolled into the near by Londis store and spent about £2 on the man. Eye of Media.com asked her why she bought him food, and she said ” because I know that if you give them money they will either use it on drugs or alcohol”. I know what it is like to be homeless because my step dad’s good friend was homeless for a period of time and any money he got went straight on  drink and drugs. It only worsened his situation”.

A respectable and dignified looking woman, Mollie Sherrington had just finished from work when she was was moved by compassion to help the man sitting on the floor asking for money. When she was told that her deed will be rewarded with our praise on line, she was chuffed and said ”really, what is the name of the site”? She made a note of it and will be pleased to see our proud article of her generous and thoughtful act of human love. Passer byes sometimes give money to beggars, but food is the best act of kindness a stranger can show to a beggar, not money. Addiction to drugs is for the addict to deal with and address, not for hardworking people to unknowingly finance.

David admitted to The Eye of Media.com that he does spend practically all the money he gets from begging to finance his terrible heroine addiction. ” I am hooked on heroine, I really want to get off it but it is a physical addiction. I have tried so hard, but it is next to impossible. In a shocking admission that will disappoint most generous givers to homeless people, he admitted having a home to live in, but said  ” my home is like being on the streets”.

David has two other drug and alcohol addicts staying with him but is too weak to kick them out. They pay rent my sorting him out with drugs, but this doesn’t prevent him from begging daily on the streets. ”They do sort me out a lot, he said(referring to drugs) but when they run out I am stuffed. I have to go and fetch money for myself you know, you can’t always rely on others. Sometimes they bully me by eating my food without permission or inviting some of their mates round for a  pipe even when I don’t know them. They take over my place, you know and I feel ashamed that I can’t do anything about it, but that’s the fact of the matter”.

Why can’t this 44 year old man put his foot down and stop them? ”Well, I am off my face most of the time this is happening, and I know that once the drug wares out, I am relying on them for more supplies, so long as they got more. They have more money than me because they have more ways of making money than begging, they are hard nuts, real naughty guys that know some naughty people. They are not to be messed with”.

One can only wonder how good samaritan Mollie Sherrington would feel if she knew his circumstances. Perhaps she would house him, who knows? However, even with the knowledge of his situation, good samaritan Hollie Sherington should have no regrets in her wise action of supplying him food. Because even the hopeless and extremely foolish drug addicts, need someone to help them with food since their regular food is generally drink and drugs. Good samaritan Mollie Sherrington is our star citizen of the week.