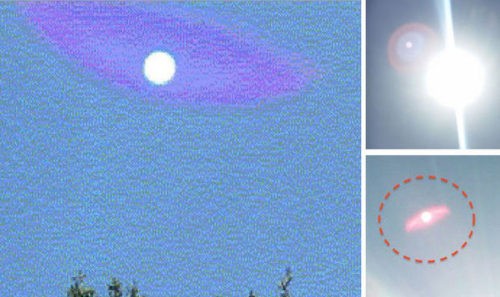 A UFO Orb has been spotted in the county of Leitrim , in the form of an orb of light in a dial shaped purple haze.

Described by the Irish Sun as an eerie snap of a UfO, it has been recorded by the Filers Branch Institute, The U.S based national Ufo centre, run by Major George Filer, who worked with the U.S military for 20 years.

The snap is indeed eerie, and does not appear to have any rational explanation about its origin. It has reportedly been snapped in other parts of the world, although list of those countries have not been provided. If it to a indeed a UFO, it has a slightly different appearance to must UFOs previously snapped.

UFOs are known for their diversity in shape and appearance. They qualify as ufos once there are no alternative explanations for what they are. Shown to Astronomer, Ramon Ambro of the Kinfskand observatory, he put it down to a new type of light but yet known in physics.

Referring to it as a new kind of light called the plasma ball, the Astronomer confirmed it has been seen in Norway. However, he believes it is yet to be tested to assess it’s fitting into the scientific category of physics.

Skepticism of UFOs is widespread in many circles, although the phenomenon is gaining acceptance among many professionals. Strange sightings like this is nothing new, but the different forms of their appearance continues to astound many observers. The speculation continues, but we already know that on a complex universe with new discoveries of earth sized planets, anything is possible