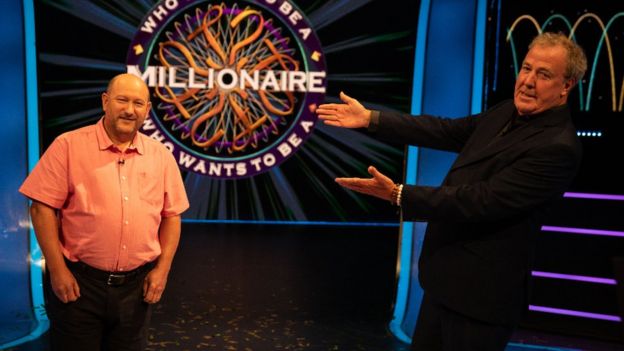 A teacher whose brother previously won the £500,000 prize in September , has upstaged him  to win the jackpot on Who Wants To Be A Millionaire?

Donald Fear, 57,  had vowed to improve on his brother’s  high achievement on the show, after describing him as his” hero and friend” . The very bright and knowledgeable history and politics teacher used  one of his life line’s- the 50/50 option,  to become the first £1m winner in 14 years, 11 months after his  Brother Davyth- geography teacher- won half a million on the show.

Mr. Fear correctly answered the final question on Friday’s pre-recorded show, completing a perfect run of 14 previous questions. The question was: “In 1718, which pirate died in battle off the coast of what is now North Carolina?”

It is the sixth time in the show’s history that one of its participants has won the £1m jackpot.

Donald, who had taught piracy to a group of Year 8 students about eight years ago reflected on his excellent performance, which required him to remember events which occurred on certain dates.  He said: “I’m a dates man,” Mr Fear said.

“You don’t be a history teacher for 33 years without knowing a few dates, and the date 1718 and Blackbeard leapt out at me instantly.”

throughout his run of 15 correct answers.

“It’s like sitting next to the internet in a pink shirt,” he said, describing him as “an encyclopaedia with a moustache”.

Mr Fear is the sixth million-pound winner in the show’s 22-year history.After his win, the father of four celebrated by going on a caravan holiday along the Northumberland coast with his wife of 33 years, nurse Debs.

And his elder brother Davyth has also been part of his celebrations.

“He is so pleased for me,” said Donald.

“We went to spend a night in a hotel with our wives last week and got absolutely plastered and he kept poking me saying how pleased and how overjoyed he was by it.”

Donald Fear said he wanted to give at least 70% of his winnings to his family and spend the rest on a “comfortable retirement”.

And that retirement is due to begin soon – since winning the jackpot, he has resigned from Haberdashers’ Adams Grammar school in Newport, Shropshire.

But he said: “The rules are you have to go at the end of a term.

“Actually, I never investigated the possibility of whether it would be possible not to go back at all – but how unfair to my A-level students that would be?”

Mr Fear added: “I was planning to go in two years anyway just before my 60th birthday.