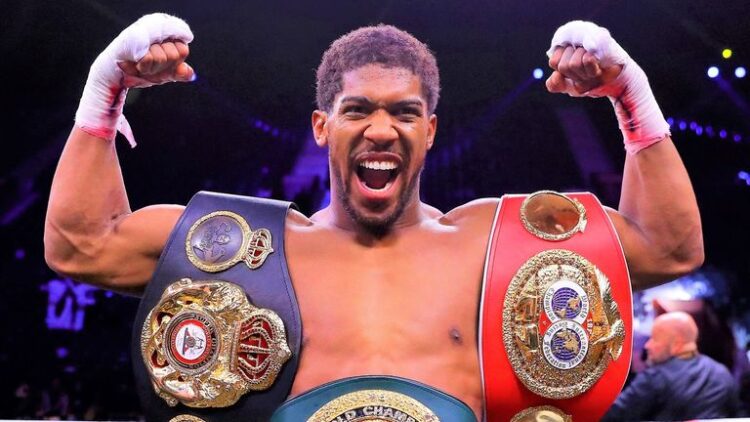 Anthony Joshua may have to settle for less cash for his next big fight, if he performs in a much smaller audience for his December bout against  Kubrat Pulev in June at the Tottenham Hotspur Stadium.

The fight which was originally scheduled for last June but postponed due to the pandemic, is now set to take place during the festive season

. Joshua- a big earner in the sport who already worth an estimated £42m ($55) from the fights during his four years as a professional- will have to settle for a lot less for his next fight. It is not clear how far his purse would drop, but he will still earn a good pay day.

Joshua  suffered a blow to his reputation after being sensationally stopped by Andy Ruiz Jnr in June 2019, has restored a lot of his pride since winning the rematch, but  will have a tough opponent in front of him again behind closed doors.  Most of the Londoner’s fans will be watching from a television screen in various bars or at home.

The six person rule  in doors, will mean more people watching the fight from various bars across the country.

Pulev, who has only lost to Wladimir Klitschko on points. It will be a completely different type of atmosphere with considerably less fans.

Promoter Eddie Hearns told BBC radio 5 today: ”Anthony hasn’t boxed for a year and the ultimate thing is he needs to progress his career,’ Hearn told BBC Radio 5 Live. ‘He wants to learn, he wants to fight, he wants to be active and we live in a world now where you can’t wait.

‘You’ve got two options: you either sit and wait – and that includes Anthony Joshua – maybe until next year, or you get out there and you fight, you earn your money, you learn your craft and you continue to battle through it.

‘We hope that there is some sunshine over the hill with this whole nightmare.

‘We are not prepared to sit tight and wait and we have said in these schedules, fans or no fans, our fights will be taking place.

‘If you’re a business, if you’re a sport, you can’t afford to sit and wait for what might be.’

Tyson Fury is also set to have his trilogy with Deontey Wilder on July 19th.