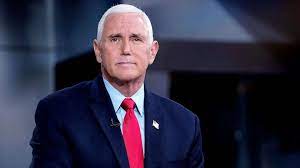 About a dozen classified-marked documents stored in boxes at his home in Indiana last week and turned over the materials to the US justice department, according to a top adviser to the former vice-president.

The documents were taken to Pence’s home at the end of the Donald Trump administration and Pence was unaware of their presence, his representative to the National Archives and former counsel Greg Jacob said in a letter.

Special counsels have been appointed to investigate Biden and Trump over the retention of such documents.

Lawyers found  the documents as part of a search triggered by the recent discovery of classified materials at the former office and home of President Joe Biden,  according to a copy of the letter obtained by Politico.

Justice Department officials travelled to Pence’s home and collected the documents last Thursday, while Pence was in Washington for the anti-abortion Right to Life march, according to a second letter from Jacob.

Last year, Pence explicitly told several news outlets that he did not take classified information with him after he left office.

The news comes as both President Joe Biden and former President Donald Trump are caught up in a controversy over classified documents as the issue of greater protection for documents grows in importance.

The revelation makes Pence the third high-profile official to have classified material discovered at their residence in recent months, after Biden and former President Donald Trump, both of whom are now being investigated by special counsels under the Department of Justice.

Earlier this month, Pence told Fox News in reaction to the news about the Biden discoveries that the handling of classified information was a “serious” matter.

“I can speak from personal experience about the attention that ought to be paid to those materials when you’re in office and after you leave office,” Pence said.

Biden’s lawyers  have been actively co-operating with officials over the documents, while Trump’s team’s lack of cooperation resulted in subpoenas and searches and an investigation by the Justice Department for obstructing an investigation.