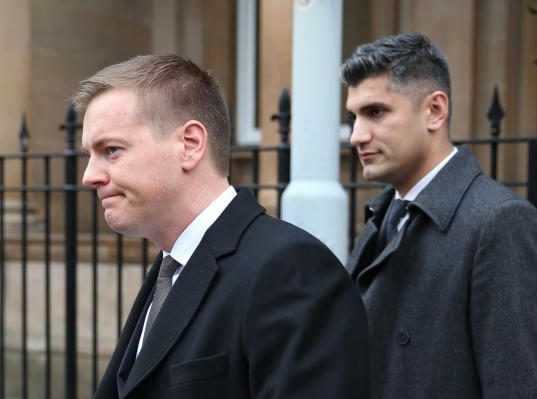 A case against two Canadian pilots accused of preparing to fly a passenger plane when under the influence of alcohol has collapsed in the Appeal Court.

The appeal court ruled that the Crown had not met its duty to supply the defendants with samples o their blood. The blood samples were reportedly destroyed at a prison, in a shameful example of gross negligence.

Jean-Francois Perreault and Imran Syed appear to have escaped the force of the law after the prosecution failed to offer them the blood sample used to test for alcohol levels.The defendants can, therefore, argue that they were never over the limit on July 18, 2016 before they were due to take off the Air Transat flight from Glasgow to Toronto.

Prosecutors said that after “full and careful consideration” of the facts and circumstances there would be no further proceedings in the case. Syed, from Toronto, allegedly performed “an activity ancillary to an aviation function” when he a had 49 milligrams of alcohol in 100 milliliters of blood- more than twice the legal limit of 20.

The delayed Airbus flight eventually took off with a different crew the next morning, after about 250 passengers having spent the night at hotels close to Glasgow Airport.

Paisley Sheriff Court heard at an earlier hearing that both men requested part of their blood samples when they were taken in July 2016, in order to have them independently analysed.

The samples were among their belongings when they arrived at HMP Low Moss on July 19 2016, however prison staff did not know what to do with them.

Security manager of the Scottish prison, Paul Scoular, said he was concerned the blood samples might have been worthless because they had not been in cold storage.Whose fault is it they were not in storage? This embarrassment to the prison and the Crown is a reflection of outright incompetence, unless it is an admission of guilt by the prison and the crown that the pair were not actually over the limit. The credible scenario would be that the men were over the limit to have been charged, but the Crown and the prison management bungled the case.

This conclusion might be wrong if the defendant’s were not really guilty, but were victims of a conspiracy to damage their character. It is doubtful the CPS would have got it wrong on the charges, but look, they got it wrong when it mattered most to prosecute the case.

Scouler says he expressed his concerns with the pilots and that both men consented to destroy the samples, known as B. He then passed the samples to the prison nurse who put them in a locked drawer and later destroyed them when she heard the two pilots had been released from the prison.
Mr Perreault disputed that version, and said he did not give permission for his blood sample to be destroyed.

He told the court: “I wanted to have my blood sample analyzed.” After a hearing at Paisley Sheriff Court in September, Sheriff James Spy ruled that the samples were available for independent analysis at the time, and that police and the Crown were not responsible for the effects of subsequent events. The case has now fallen apart, and the pilots left the court with their character intact.

A Crown Office spokesman said: “It is the duty of the Crown to keep cases under review. After full and careful consideration of the facts and circumstances, including the recent decision of the Court of Appeal, Crown Counsel instructed there should be no further proceedings at this time”.

“We are working with Police Scotland to ensure there are proper processes and guidance in place covering the retention and storage of samples when an accused person is remanded in custody.”

A spokesman for the airline said: “We note that all charges against our pilots have been dropped. The pilots were indeed suspended pending the outcome of the court proceedings. They have now been declared innocent.

“The safety of our passengers and flight crews is our number one priority. We have always taken and will continue to take, all necessary measures to ensure that applicable regulations, as well as our internal rules, are followed to the letter. We can count on the unfailing co-operation of our personnel in that respect.

“We will be meeting with them in the next few days to plan their reinstatement since there is no charge against them and we have no evidence that they have broken any law nor our internal rules.

“They will need to undergo retraining and requalification as per applicable legislation, and we will put in place measures to ensure that their behaviour is exemplary.”