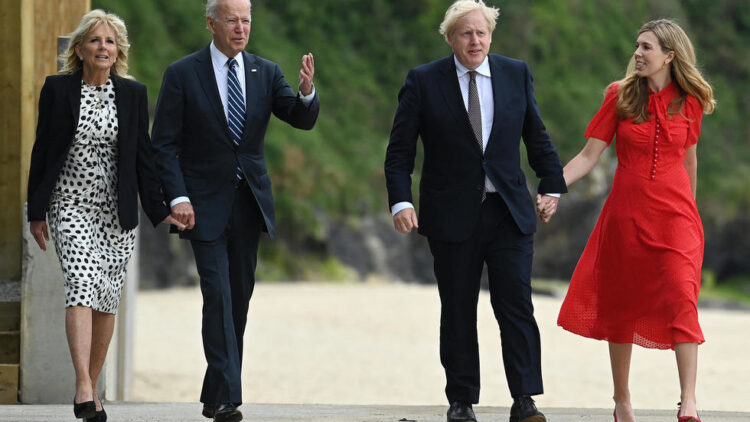 Uk prime minister, Boris Johnson committed to working closely with all parties involved in the shared goal of achieving a Northern Ireland agreement with respect to the controversial Northern Ireland Boarder which has been causing annoyance and hard feelings in Northern Ireland and among EU chiefs in particular.

Johnson, who had before now been posing on the drivers seat of the political disagreement, may have gone full circle after   hailing Joe  Biden, as a “breath of fresh air”, and insisting there was “absolutely common ground” over Northern Ireland. His pronouncements should come as good news to those who have witnessed the never ending commotion of the Good Friday agreement, though the wording of the commitment was in relation to working closely with all partners towards an agreement.

A Downing Street statement following the meeting between Mr Johnson and Mr Biden said: “The leaders agreed that both the EU and the UK had a responsibility to work together and to find pragmatic solutions to allow unencumbered trade between Northern Ireland, Great Britain and the Republic of Ireland.”

The  earlier storm  over the UK Government’s handling of the Protocol with the European Union which governs post-Brexit arrangements on the island of Ireland had  threatened to overshadow the first meeting between the two leaders. Tensions were rising among political players in Northern Ireland, the EU, and Uk Parliamentary Mps,  but by the end  of the day, the two historical allies  expressed solidarity with respect to the Good Friday Agreement. Biden had expressed deep concerns about the direction of deadlock in which talks appeared to be going nowhere. The intervention of the strong and decisive American leader may have spoken more than a thousand words.

By the end of their meeting  Boris Johnson  was a lot more open to the idea of a joint effort in resolving the crisis: “It’s wonderful to listen to the Biden administration and Joe Biden because there’s so much that they want to do together with us – on security, on Nato, to climate change.
“It’s fantastic, it’s a breath of fresh air.”

In a  joint statement covering   numerous areas including health, science and technology, climate change and nature, human rights and democracy, Northern  Ireland was included  in their joint statement of purpose.

”We are proud of the achievements of the Belfast/Good Friday Agreement, and we remain fully committed to its three strand approach, that: established the democratic institutions in Northern Ireland; provided for consultation, co-operation and action across the island of Ireland; and created structures for British-Irish engagement, the statement read.  It continued:  It took a deep partnership between the U.K., Ireland, and the U.S. to support the people of Northern Ireland in bringing the Troubles to an end, and it will take a continued and ongoing partnership to advance and safeguard Northern Ireland’s stability and prosperity into the future.

”Today, the U.K. and U.S. reaffirm their commitment to working closely with all parties to the Agreement to protect its delicate balance and realise its vision for reconciliation, consent, equality, respect for rights, and parity of esteem. Unlocking Northern Ireland’s tremendous potential is a vital part of safeguarding the stability created by the Agreement, and the U.K. and the U.S. will continue working together towards that shared goal”.

The President and the Prime Minister set out a global vision in a new Atlantic Charter to deepen cooperation in democracy and human rights, defence and security, science and innovation, and economic prosperity, with renewed joint efforts to tackle the challenges posed by climate change, biodiversity loss, and emerging health threats.

On Human Rights and Democracy, the statement said ”the U.S. and U.K. will continue to make practical efforts to support open societies and democracy across the globe. We will do this by defending media freedom, advancing a free and open internet, combatting corruption, tackling disinformation, protecting civic space, advancing women’s political empowerment, protecting freedom of religion or belief, and promoting human rights of all people. The United Nations remains the cornerstone of the international system, and its foundational principles reflect our shared values”

We commit to enhance further the world’s strongest bilateral defence, security, and intelligence partnership to overcome the evolving threats of the twenty-first century. This includes threats and challenges associated with: cyberspace, foreign interference, harmful influence campaigns, illicit finance, violent conflict and extremism, and terrorism in all its forms. To this end, we will continue our partnership on those challenges, including working together closely on cyber security, countering illicit finance, and tackling all forms of terrorism by working together to address it online and enhance international collaboration on thwarting violent extremism that is racially. ethnically, or ideologically motivated, including a range of hateful and white supremacist ideologies.

Through strong and principled leadership we will work to shape and secure the international order of the future with NATO as the bedrock of our collective defence.

After the Prime Minister and US President met along with their wives Carrie and Jill, Mr Johnson also optimistically predicted they would also not disagree on “anything else”.

Asked if Mr Biden made his alarm about the situation in Northern Ireland clear, Boris Johnson said: “No, he didn’t.
“What I can say is that America – the United States, Washington – the UK plus the European Union have one thing we absolutely all want to do and that is to uphold the Belfast Good Friday Agreement and make sure we keep the balance of the peace process going.

“That’s absolutely common ground and I’m optimistic that we can do that.”

Mr Johnson said: “It’s wonderful to listen to the Biden administration and Joe Biden because there’s so much that they want to do together with us – on security, on Nato, to climate change.
“It’s fantastic, it’s a breath of fresh air.”

Mr Biden said the meeting, which lasted around an hour and twenty minutes, had been “very productive”.
He told reporters that the revitalised Atlantic Charter agreed by the two men would address the “key challenges of this century – cyber security, emerging technologies, global health and climate change”.
Mr Biden said: “We affirmed the special relationship – that is not said lightly – the special relationship between our people and renewed our commitment to defending the enduring democratic values that both our nations share.”.

The EU has threatened to launch a trade war against Britain if it fails to implement checks on goods entering Northern Ireland under the terms of the Brexit “divorce” settlement which Mr Johnson signed.

The prospect of a “sausage war” trade dispute came after Brexit minister Lord Frost refused to rule out the possibility that the UK could unilaterally delay imposing checks on British-made chilled meats which are due to come into force at the end of the month.

The meeting of the two leaders comes on the eve of the G7 summit which will bring together the world’s wealthiest democracies at a time when the West faces difficult judgments in responding to the rise of China as an economic and political force and the destabilising actions of Russia.

The original Atlantic Charter was a joint statement made by Winston Churchill and Franklin D Roosevelt in 1941, setting out the UK and US goals for the post-Second World War world.

An interesting agreement between the  two leaders was that of establishing a new joint taskforce will examine how to resume travel between the US and UK, which ground to a halt as a result of the pandemic . Only Uk citizens with special permission for visits in considered largely in the national interest have access to the United States.

A ban on travel from the UK to the US was introduced on 16 March last year. The presidential proclamation of 14 March 2020 banned UK travellers from entering the US because their presence “threatens the security of our transportation system and infrastructure and the national security”.
It prevents holidays and non-essential business or family trips to the US. The principle exception is: “Any alien whose entry would be in the national interest.”