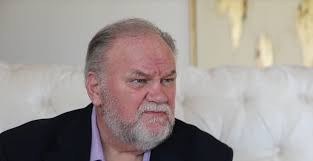 Meghan Markle’s estranged father has  threatened to air his daughter’s dirty laundry , while  also begging to be forgiven and allowed to meet his granddaughter Lilibet in the trailer for an explosive interview.

The 76-year-old, who hasn’t spoken to his daughter in three years, has been looking for his own opportunity to talk to the world, after Meghan aired her world interview with Oprah Winfrey in March.

Meghan cut off contact with her father , Thomas Markle, after he was caught staging paparazzi shots ahead of her royal wedding to Prince Harry in 2018. In a recent interview with Oprah Winfrey, Meghan told how her father had ‘betrayed’ her’ whilst she ‘found it hard to reconcile’ with him.

During the interview, Meghan said: ‘I look at Archie, I think about this child, and I genuinely can’t imagine doing anything to intentionally cause pain to my child’.

However, Thomas Markle  hit back during 60 Minutes, denying her claims, before calling his son-in-law Harry ‘snotty’, whilst accusing him of being unsupportive when she was suicidal.
In an interview with Good Morning Britain, Thomas said: “It really did upset me, like I said, it would have been easy for her to reach out to me, any of the rest of her family, who she claims she doesn’t know”.
‘But the other thing is that I would think that she could turn to her husband.’

In a trailer for an interview with 60 minutes Australia, set to air this Sunday, he asks to be forgiven for what he refers to as his “one dumb mistake” and says he is desperate for a truce. The longer the Meghan’s grudge with her father remains in the public domain, the more of a stain it is on her image. The situation is potentially getting messier as time goes on.

Martin, who is divorced with Meghan’s mother  Gloria, must be depressed, having  already have concluded the relationship with his daughter to be beyond repair- he has seen no signs to conclude otherwise.

Martin Markle, who paid for Meghan’s private school and her acting school, finds himself on the dumped end of her list of associates. He is planning to twist his own knife as deeply as possible
“I haven’t spoken to her [Meghan] since two days before they got married,” he reveals in the 40-second teaser.
And when asked about where he learnt of Lilibet’s birth he replies: “No phone calls, I just heard it on the radio.

“I’ll be very disappointed that I don’t get to hold my granddaughter.”
The interview will add to the displeasure against Meghan Markle, by those who believe she is being hypocritical in writing about father relationships with their sons when her damaged relationship with her father is public news for all to see.

Meghan Markle’s fragmented family background is one of the several objections people had against her inclusion in the royal family. Meghan was also said to have been forceful in her attitude with royal maids non an occasion in which she questioned whether there was meat in  a stew meant to be vegan.

There have also  been suspicions in some quarters that the former U.S actress’s race may be an added factor, especially after a Telegraph reporter was sacked  for unapologetically posting a racist tweet.
Julie Burchill tweeted that they could have named their child Georgina Floydina, describing it as a missed opportunity. Burchill went further to express wonder as to why Meghan did not consider using her mother’s name, Gloria to name their second daughter.

The journalist took to Facebook yesterday to announce she had been sacked – but suggested she hadn’t been happy at the newspaper as they had ‘rejected her edgy column ideas’.