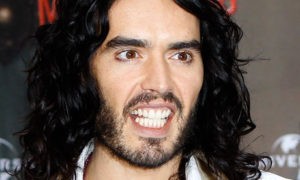 Russell Brand has been touring The University of East London with the view of possibly considering a course there according to a student paper of the University.

The controversial comedian turned political activist has already written a few books, and is intellectually strong by all standards of assessing the Essex born 40 year old. However, the one thing missing might just be an official validation of his intellectual credentials, considering Brand is on record for once announcing that he does not have A levels.

If this is the case, it means the former television Big Brother’s mouth host, built his intellect on the back of his secondary school education up to G.C.S.E level with further private reading, which is something a lot of people do. Anybody with a relatively strong secondary school education can potentially enhance their intellect with further reading, except that they will be missing out on the objective assessment of a teacher in relation to how well they have understood what they have read, and the level of intellectual competence they have demonstrated their learn t knowledge to a given framework.

Brand had a difficult childhood, having been sexually abused by a tutor at the age of 7 in what can be stated to be a very unfortunate and deplorable incident about which all reasonable people should empathize with him. We credit his parents for having the ambition to hire him a tutor at the young age of 7 because only parents who absolutely desire the very best for their children would do this. One thing we do know is that his father was not complete in the area of discretion, because Brand once revealed how he was taken to see prostitutes by his dad when he was only 13 years of age. What was his dad thinking? Exposing your child to a potential life of prostitutes at 13 reflects the highest level of bad judgment because it serves to objectify women in the most reprehensible way imaginable.

Brand is a decent looking fella, and must have been a good looking teenager too which makes it hard to imagine the strong possibility that exposure to prostitutes could easily contribute to heightening his sex drive. Teenagers go through all sorts of puberty issues, and a sexual abuse at the early age of 7, added to exposure to prostitutes is not a good way to introduce a child to this troublesome world. It makes it no surprise that he eventually ended up in a life of drugs, though the remarkable recovery he made is most commendable.

So, we know Brand did not go through the rigorous A levels some of us put our bodies and mind through, but he built his intellect fine. He is sometimes over the top in his use of language, sometimes giving the impression on one who has spent an awful lot of time feeding on dictionaries and Thesaurus’s; although if you have read his books or listened to him, you will hardly catch him use a word wrongly. He has often shown a lack of discretion and guidance when it comes to expressing his views, many times lacking sensitivity as he audaciously utters words with far reaching effect. University may fine tune his appetite for intellectual energy, often set at too high a standard for the regular intellectual. It will balance his choice of words with the message he wants to present and also fill in any void present that makes him feel he needs to compensate for not going to University.

Personally, I don’t think he needs to fill in any such void, but can’t deny that such an experience will only be beneficial and not destructive. What University will not do is stop him from voicing controversial opinions, if anything, it may empower him in ability to do so with measured words. Brand is well known for advocating egalitarianism and opposing support for politicians and capitalism in a world governed by self interests.