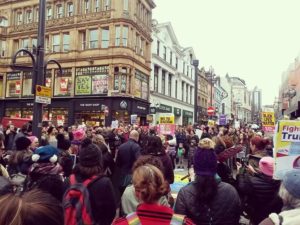 Hundreds of protesters gathered at Leeds City Centre today to protest against Donald Trump’s visit to the UK.

The well-attended event saw several people holding placards with anti-Trump sentiments, as the crowd chanting “Trump out
refugees in”.

A number of speakers that included both EU nationals and British-born individuals,  were  invited to the podium to express their strong disapproval of both Brexit and President Trump.

” Britain will not be great Britain without migrants, Marvin Newton, who organised the event told the crowd.

“Take migrants out of Britain and you have nothing left. We say no Trump and no to racism”, an animated Newton said.

Several police and council officials  surrounded the event where free food and drink was served. EU nationals were in numbers with placards and banners condemning the U.S president and Brexit together.

Councillor and soon to be Lord Mayor Jane Dowson, told the eye of media.com “alot of people don’t realise that without migrants the NHS will not exist.

Dowson, due to be a Lord Mayor next year added.

“People went into the referendum without knowing what they were voting for. I do think another vote should be had where people know what they are voting about”

“Some have pretended that the  problem of not having an independent judiciary was their issue, but that is just a smokescreen for racism.

Financial coach, Samuel Leigh,  was one of the speakers at the event, Leigh said ” if you look at all the racial attacks that took place after Brexit, it tells you what this was really about.

“I’ve had people say that EU foreigners here are too many. The Brexit outcome does not affect British born people like me, but it is important for people to know what this was really about “.

Music was played to which people danced, then a march across Leeds  town took place.

With three members of he eye of media.com at he venue , we spoke to various members of the crowd to see  how many people actually shared he sentiments of the event.

About 90 percent of the sample we spoke to present shared the views , whilst roughly 10 percent were there for the tasty food and refreshments. It was quite an event.