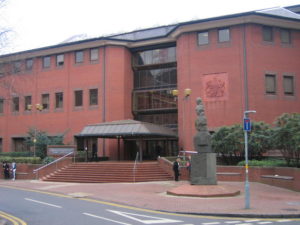 A dog owner has been fined for violently attacking his pet, after being caught on CCTV.

Richard Cheshire was caught on CCTV kicking and stamping on his dog Pablo in a violent drunken rage. The wayward thug hen spat on the animal, in a worse than animal like behaviour.

Half naked Cheshire was in jigging bottoms when he showed no love to an animal he chose to have as a pet.

The dog was lucky to survive the merciless assault by a rogue who quite frankly should have been jailed for it.

Yet, a soft judge only fined him 385 pounds for the with led act, and banned him from owning an animal for life .

Just as horrified observers in the court gallery felt some justice had been done, he judge ruined it by saying Cheshire could apply for the ban to lifted after two years!

How weak a judgement! Cheshire’s lawyer argued that he had suffered depression and anxiety, but that hardly justifies such barbaric act. People.like Cheshire is the reason some dogs attack people .

Dogs behave the way they are trained. If Cheshire applies to lift the ban after two years, as he is expected to do, nothing stops him repeating the senseless act within the privacy of his home.

Then when that dogs decides to attack a child or a random person, we will all begin to trace the history of that attack.

What a terrible thing for him to do. Being drunk or being.g depressed is no excuse, Cheshire surely has extreme tendencies. He should have been locked up and banned for life. An appeal by the crown should be imminent.