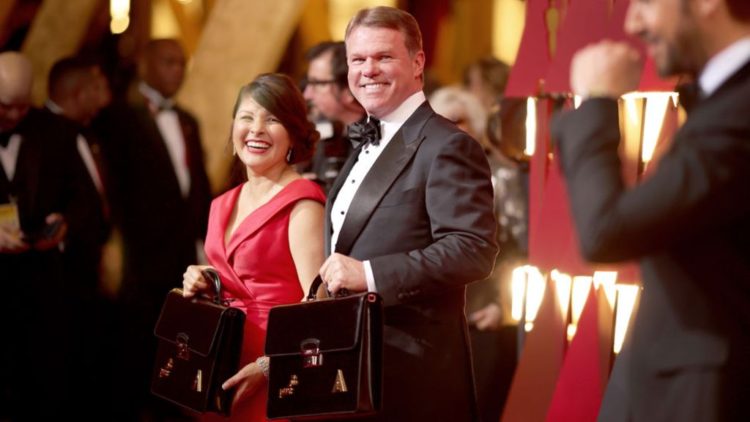 Two accountants who committed an embarrassing blunder at last weekend’s Oscars will never work for the Oscars again.

Brian Cullinan was reportedly distracted backstage when he handed out the wrong envelope, Oscars president said. The pair have been removed from all engagements to do with the Oscars, in an an embarrassing blow for the pair who have blown a big opportunity they had.

Brian Cullinan was the careless representative guilty of negligently handing over the wrong envelope that led to La La Land mistakenly being announced as best picture, when Moonlight was the choice winner. distracted backstage. He tweeted before deleting a photo of Emma Stone in the wings alongside her new Oscar minutes before giving presenters Warren Beatty and Faye Dunaway the wrong envelope for best picture.
The error meant that Beatty and Dunway had to face the embarrassment of a vain celebration which only blew in their face minutes later when the blunder was realised.
The blunder was the biggest in its 89-year history of the Academy awards. The Academy of Motion Picture Arts and Sciences’ relationship with PwC- responsible for a cosy partnership and revelation of Oscar winners for 83 years is under review.

PwC released a statement late Sunday and another Monday taking “full responsibility for the series of mistakes and breaches of established protocols” during the Oscar show. The company did not immediately respond to email and phone messages sent Wednesday.
The apology did nothing to change their fate, which now means they will never have another chance to make such a huge error again.

Horowitz had the winning Oscar in his hands before revealing the shameful error and announcing Moonlight was the actual winner. Mistakes of this kind should never occur on such a big stage, and a big lesson will be learnt by anybody privileged to be in a position to award oscars in future. Distraction is no excuse, concentration is key in such high positions.

The academy also addressed a separate embarrassment on Sunday’s show, apologizing to the Australian movie producer it incorrectly displayed during the in memoriam segment.
The academy extended its ”deepest apologies” to producer Jan Chapman, whose photo was erroneously used in the tribute instead of Chapman’s colleague and friend, the late Janet Patterson. Chapman had said she was “devastated” by the error.