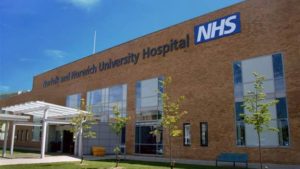 Norfolk and Norwich hospital overpaid a private company £3m for building it, and have refused to address the embarrassing blunder.

Despite the over payments being highlighted to Octagon in 2014, the hospital is withholding information about what happened to what appears to be an extortionate amount of money.

The extravagant sum of money has alarmed locals, patients, and Mp’s, who consider it both wasteful and suspicious.Three Mp’s have reportedly written to Mark  Davies- the chief executive of the Norfolk and Norwich University hospital – asking for the matter to be investigated.
The  hospital under the Norfolk and Norwich Private Finance Initiative (PFI) contract are said to pay out  tens of millions of pounds each year to the business consortium Octagon, which leases the facility back to the hospital’s trust.
An estimated £57m will be paid to the Octagon this year, by a hospital where a stomach bug even today has caused infections that has  led to a warning for patients to be very restrictive on who they invite to the hospital. The full scale of the bug was not disclosed to the eye of media.com when we made contact, but we know the long term bill being paid by this hospital  is expected to run into frighteningly high figures. Yet, the hospital appears to be arrogantly refusing to be held accountable for the huge  and excessive amount of money they paid to a private firm. Money that could have done wonders for the NHS and lots of others needs like children’s social services, or the homeless.
When the eye of media.com contacted the hospital, a spokesperson cited ” confidentiality” and the mutual ”commercial interests”of the hospital and the private company as the reason for their silence about the flagrant overspending that has sparked huge concern in the area. Confidentiality that is implicitly tantamount to concealing information in the public interest, and one which invariably must have compromised the resources available to other patients or
Freelancers in the Norfolk area told the eye of media.com that the documents that  the over payment was brought to light through documents obtained by the local paper- The Eastern Daily press . The documents reveal that the over payment has been ongoing for over 15 years, apparently  because of ”an anomaly relating to how inflation is measured, buried deep in the PFI contract”.
The trust has refused to tell investigating parties it was aware of the overspend, or whether any of the money has been reclaimed.
In the absence of a rational explanation, it leaves the hospital open to suspicions of a scandal potentially being covered up by the authorities there
Spread the news