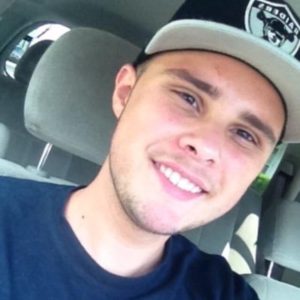 A cheating girlfriend accidentally sent her boyfriend a confession message intended for someone else.

Jordan Mcnelly from Baltimore was left shocked and gutted when a text from his 21 year old girlfriend, meant for one of her friends was sent to him in error.

In the text, she admits feeling guilty and describes herself as “a whore” as she lays bare her plans to shave herself to shag this other guy. She expresses her plight arising from the fact her boyfriend, Jordan had planned to take the day off work but has now text to say he will be at work.

The text has gone viral with the hashtag #2yearswithahoe and already received 50k views and several retweets, as he exposed her stupidity and disloyalty by tweeting out her careless confession. 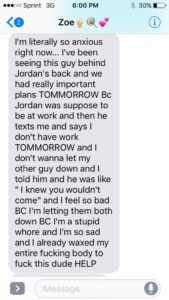 The the text sent by Jordan Mcnelly‘s partner

The admission reveals the age of dishonesty we live in, where many youngsters including girls cheat on their boyfriends, being somewhat as promiscuous as guys.

Mcnelly tells his audience that she isn’t that bright, and any disappointment he feels as a result of the discovery is hidden by his willingness to share the story. Mcnelly does not tell his audience whether he plans to leave her, or retaliate by cheating on her.

He also fails to reveal her surname or her picture, which he really should have done to shame her thoroughly. The revelation was sent to the eye of media.com from a resident of Baltimore, a part of the UK none of our team is familiar with at all

We are honoured that residents of Baltimore are aware of us, and ask them to interact with us from the to time and send any more interesting stories to us. Despite the large number of views the tweet received none of us was aware of the story until it was brought to our attention.

The eye of media.com advises young Mcnelly to ditch her, send us her picture , full name, and contact, so that we can interrogate her further. He should imagine how many other times she has cheated on him without his knowledge. He should go for a check up. What a disgrace she is to women!