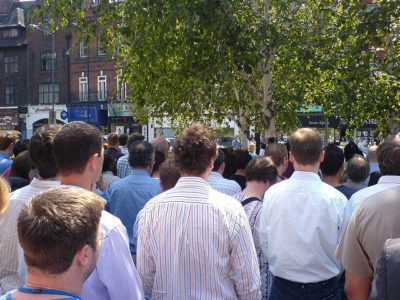 Londoners wept as the nation observed a minute’s silence for the victims of the London terror attack.

A similar observance of a moment’s silence was held in Manchester, where there own dead had only recently fallen victim to the evil atrocity that claimed 22 lives. The silent minute held at 11 a.m was a poignant moment for everybody with a genuine pulse of heart beat in their being.

Contemplating how innocent human beings could be wiped away so maliciously is not easy to come to terms with. The 7 dead in London and 22 in Manchester, were all enjoying themselves in vibrant atmospheres when their lives were callously aborted by people who lack any iota of empathy in their bones.

Schools, hospitals and places of work all came to a standstill as they remembered the sorrowful demise of victims who had every reason to expect they would return to their abode that night. Those of us who have lost loved ones under any circumstances know the pain of loss.

The death of a loved one by natural causes or illness is unbearably painful. That feeling is amplified when a loved one is killed because of the voluntary and premeditated act of evil by people who have no value for their own lives. A round the country, flags were flown at half mast, and as mourning citizens gazed over the sea of floral tributes, the emotional pain was daunting. The flashbacks that would have swamped the minds of those who lost loved ones in these heinous acts was emotionally destabilizing for many.

The several lives undeserving cut short in the attacks in Britain must be precious to us all. I took a moment on Monday night to look at the pictures of each one of the 29 victims in both the London and Manchester attacks, including the police officer at Westminster, and pondered deeply as I visualized what they meant to those close to them. The thought of young 8 year old Sally Rousse in Manchester snuffed away without notice, is particularly soul piercing.

We are living in perilous times poisoned by disaffected human beings intent on traumatizing the minds of the masses. A time when our hearts must be filled with empathy for bereaved families of the dead and their loved once. Anybody could theoretically have been caught up in these attacks.

I myself was eating in London Bridge one evening, not far from the scene of the incident two months ago for the first time in nearly a decade. And I still remember the Thursday morning precisely a week before the 7/7 attacks in 2005 when I used the Picaddilly line from Holborn to Kings Cross to catch the British Rail to Norfolk for professional purposes. It was around the same time a week later that terrorists struck on that same line around the same time of morning.

Those who died were normal people like the rest of us. They liked music, probably had a favourite football team, or enjoyed East Enders and other programmes. They shared the same overall enjoyment of the essence of life.

The  latest London victims  must have previously been affected by the Manchester and previous attacks as far as sharing the nation’s grief.  Their untimely death, making them the next victims, would not have been foreseen. Only the murderers were aware of the certainty of death they were about to indiscriminately subject their unsuspecting victims to.

At the eye of media.com, the team had a soul to soul chat, some in person, some over the phone. Our very best must be done to live life to our best, and to do our human best to stop or limit the evil being inflicted on innocent people in the world. It is unfair, it is wicked, it is wrong. May their souls rest in perfect peace.