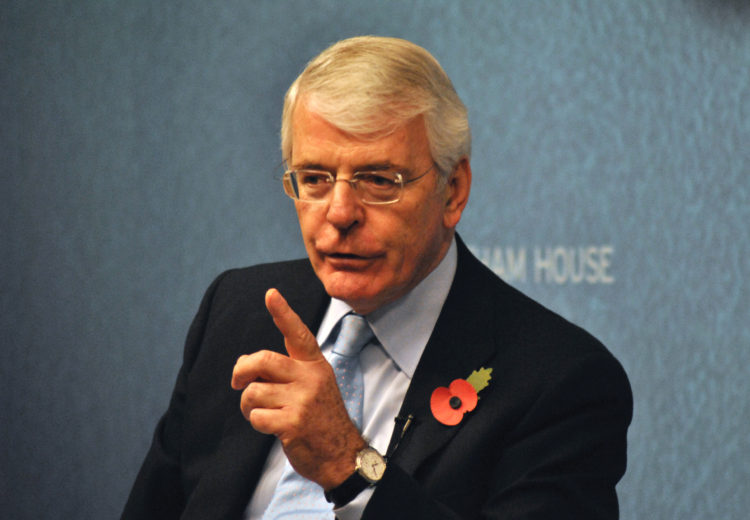 Former British prime minister, John Major, has warned of the potential of violence erupting from an alliance between the Conservative Party and the DUP.

His Warning came as DUP leader, Arlene Foster met with May today, Tuesday .

Theresa May, met in Downing street for talks which were said to have been ”positive and constructive” by Theresa May. A final deal is expected by the end of tomorrow, Wednesday.

However, Major took the major step of raising alarm that a Conservative alliance between Theresa May’s government and the DUP will compromise the peace process, and make increase the likelihood of violence, if The British Government is seen to be impartial in the political processes in Northern Ireland.

This impartiality , according to Major, could rear its head through any deals afforded to Northern Ireland that appears to show favoritism. Major suggested that Theresa May should avoid the
‘baggage” that will inevitably come with the political partnership.

Major’s decision to come out so strongly about his concerns will lead to closer scrutiny of the pact to be agreed, with its potential consequences analyzed closely by the whole media and rival parties.

Theresa May had decided to boost her absent majority with a minority from the DUP, whom they have known and interacted closely with for about two years . Their meeting today appears to have been positive, with both parties looking forward to working together .

However, Labour leader, Jeremy Corbyn, has already branded it a ” coalition of chaos”, using Theresa May’ s own words against her. Major told The Guardian there may be ” hard men” lurking around waiting to stir up violence if any signs of impartiality is shown.

The DUP want economic benefits to result from his coalition , which is Theresa May’ s only life line after her election near disaster last weekend. Major believes unavoidable economic benefits to Northern Ireland could be tantamount to partiality of a kind that jeopardise peace and stability in Ireland .

This is a worrying thought , although there is no evidence to conclude such an outcome. Such a disastrous outcome must be avoided at all costs, meaning that The Conservative party and everyone who has the best interest at heart, examine matters closely. Closely at every stage.

Conscious of he fact that The Conservative party are doing what they have to do to survive. We must all keep a close eye, especially with Major’ s emergency style warning. The Conservative party have said they are adopting a different approach , and we wait to see if some fantastic package lies ahead for the country from his coalition. Major is begging May to pull out at the last minute , but the next 24 hours will probably show that she won’t. May will have an answer to Major’s cowncerns , unless she decides to do another spectacular U turn , which may, or may not be good for the country.