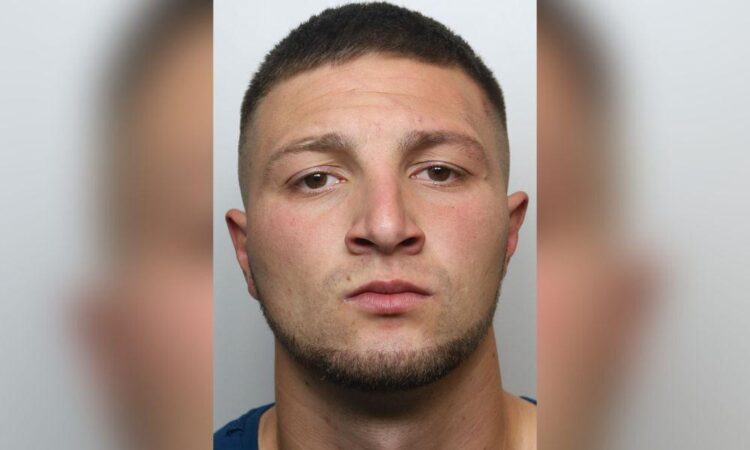 An irresponsible  Audi A6 driver who tore down the M606 the wrong way has been jailed for three years. Sullivan Lee, 20, (pictured)engaged police on a fierce speeding race as they sought his arrest because he was wanted as a ‘three strike’ housebreaker, Bradford Crown Court heard today.

He raced without concern for the safety of motorists through Brighouse onto the Eastbound M62 at 2.30pm on July 6, swerving across all four lanes and narrowly avoiding several high-speed crashes.

A police patrol unit had spotted  the black Audi was uninsured and notified as ‘off road.’ They gave chase as Lee roared along the hard shoulder at 90mph to undercut other vehicles and then swerved right across the carriageway.

He then cut on to the M606 towards the Chain Bar roundabout, almost cANausing a smash with a heavy goods vehicle and forcing other road users to take evasive action as he reached 100mph.

Lee exited the motorway at the Euroway Industrial Estate, did a U turn when he reached a dead end and headed back on to the M606, this time going the wrong way.

Official statistics reveal  19 deaths in or following police custody between 2021 and 2022,  consistent with the past decade. Prosecutor Paul Canfield said the police abandoned the road pursuit because of the danger to public safety but the force helicopter was tracking the Audi as it set off down Rooley Lane into Bradford on the wrong side of the road.

Lee then crossed back on to the correct side of the carriageway on Wakefield Road before abandoning the car on Busfield Street.

The helicopter crew directed the police to the scene and Lee was apprehended. He was arrested and gave a false name but he was identified from a tattoo on his arm.

Mr Canfield said that West Yorkshire Police wanted to point out that a fatal collision had happened in similar circumstances on the same stretch of motorway just a month earlier.

Lee, recalled to custody and sentenced on a video link to HMP Doncaster, pleaded guilty to dangerous driving on the M62 Eastbound, the M606, Rooley Lane and Lister Road, Bradford.

He also admitted burgling £3,000 worth of watches and jewellery from a house in Over, Cambridgeshire, on May 23.