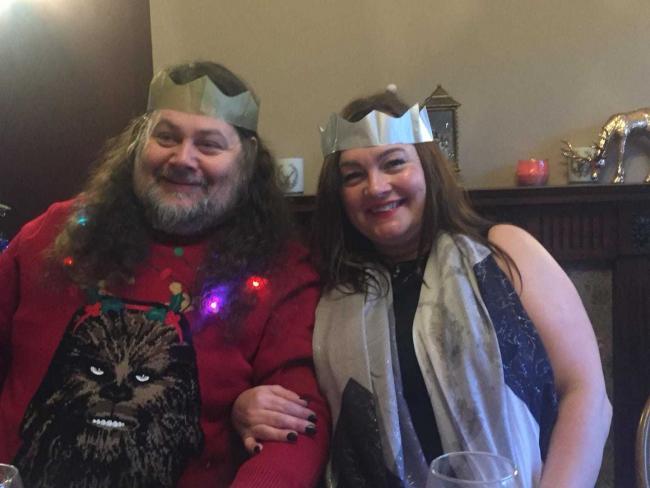 The surviving  partner of a man who tragically lost his life to Covid-19, despite having no known underlying issues,  has spoken today for the first time of the devastating moment she said her final goodbye to him through Facetime.

Sam Swales, originally from Cleckheaton,  decided to make  a life together  with her partner Mark Walsworth, in Scotland.

The pair  were living in Aberdeen with Sam’s two children and were a complete family unit who lived, laughed and spent happy times together.

A few months later Mr Walsworth  was feeling unwell at the beginning of lockdown. After his eight year old son tested positive for the coronavirus, it was obvious to him that he also needed to take a test. He lost his fight for life in hospital just a few short weeks later.

Mr Walsworth, an oil and gas industry engineer, had been working every day when lockdown began as he was classed as an essential worker. His partner Sam Swales, a health visitor originally from Cleckheaton, also continued her work and her two children were in key worker care.

“I remember being on the phone to medics about my son and Mark was at the top of the stairs, but he didn’t have the strength to come down,” Ms Swales.

“I looked at him and I just knew he had it as well. The advice was to treat him at home, but he was getting worse and was taken to Aberdeen Royal Infirmary.

“I think we had all had it. I had been feeling a bit unwell and my daughter Millie, 13, who is never ill, had been off her food, was clammy and vomited overnight, so we were all isolating.”

There had been text messages from Mr Walsworth when he was initially admitted to hospital, but then his condition worsened.

“He had been transferred to ICU and I think we knew things were getting bad. He wasn’t waking up and his kidneys had failed and he had arrested,” added Ms Swales.

“Things were bad and I had been trying to get to see him, but I couldn’t. The hospital said they would ring me to try to get me some Facetime with him within the hour. They ran back within 20 minutes and I knew it was bad. I could hear them trying to resuscitate him.

“I saw him on Facetime and I just said goodbye to him on an iPad. I had 20 minutes with him before he passed away and then 10 minutes with him after he had died. After that I took him home to England where he was cremated and we could only have a small number of people including his three sons. Then I came back to Scotland without him.”

A Mr Walsworth was type 2 diabetic,  but Ms Swales insists  he was a fit and healthy 49-year-old and was working full time.

“Mark didn’t have any other health problems yet he deteriorated so fast,” added Ms Swales“

“We kept hearing the virus was affecting older people and people with serious underlying health conditions, but Mark had been absolutely fine before this.

“He was being treated at home initially and then when I mentioned to a doctor that he previously had swine flu they took him straight into A and E. I was able to speak to him then and he sent my a couple of texts, but then he went into ICU. He died on April 18.”

Ms Swales had enjoyed time with her family for her birthday on March 11 and her parents had travelled to Aberdeen to celebrate with her. And she does feel that the response to the virus threat was naïve, given what was happening in the likes of Italy and other parts of the world, where the virus was spreading.

“I do wonder if Mark could have been saved from this if lockdown had been earlier. It is nearly six months now and I think it is only just starting to hit me. It is hard me, for the children, for his family. I can only let a little bit of grief in at a time and then I have to stop as I don’t have the luxury of falling apart. If I get through this without losing another person I love then that will something.

“When I think I Mark I think of how brave he was. He lived and worked in the town he was born and yet he left to start a new life with me and the children. He was just amazing and everything a partner should be – we were a family.

“Mark would have been 50 in November and I still feel as if we should recognise it in some way and not let it go by. My children couldn’t attend the funeral and I think they need something way to remember him.”