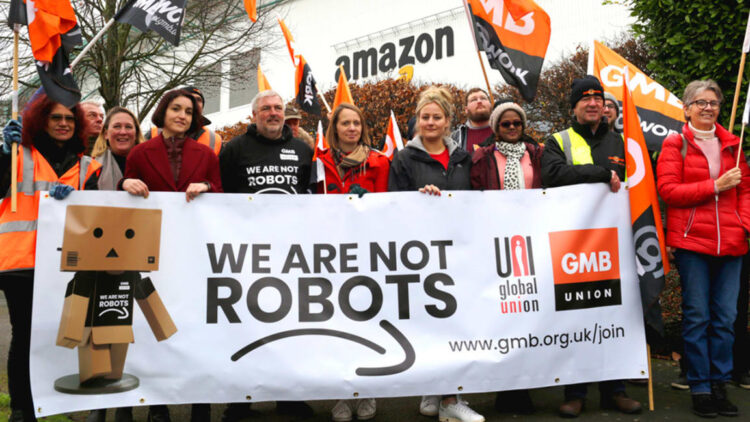 Amazon workers are going on strike in Britain, in its first formal industrial action in the country for the U.S. tech giant.

The 24-hour strike action began Wednesday a minute after midnight. Strikers are expected to picket outside the company’s site in Coventry in central England throughout the day. The GMB Union, which represents the workers involved, said it expects 300 employees out of a total 1,000 at the plant to turn up to the walkout.

Disgruntled staff are unhappy with a pay increase of 50 pence (56 U.S. cents) per hour, equivalent to 5% and well below inflation. Amazon introduced the pay hike last summer. But warehouse workers say it fails to match the rising cost of living. They want the company to pay a minimum £15 an hour.

She said staff who worked through tough conditions during the pandemic are just “trying to get decent pay”.

“They (the centres) are pressure-cooker environments they work in, with the targets they’re expected to reach,” she added.

“They (Amazon) just wear them out, get rid of them, replace them.”

Ms Gearing added: “After all that, they have just offered a 50p pay increase in the biggest cost-of-living crisis that we’ve had in decades.

“I think, when the workers have got nothing to lose, you see them coming out fighting.”

She said the striking workers are “not militant” and “need a job”, adding: “Like I say, they’ve put up with the conditions in those centres for a long time.”

“Coventry has been open four years, we’ve had issues since it was open. Rugeley (Staffordshire) before that – they’re just horrendous places to work,” she claimed.

She said the main issue for workers is what she said are target-led performance measures, set by an “algorithm”.

“So, imagine turning up to work not knowing if you’re going to make the grade.

“If you don’t (hit targets) you end up in a disciplinary, so they’re just having to work, work, work, they’re not allowed to talk to people, it’s difficult to take a toilet break,” she claimed.

“In one of the other fulfilment centres, we were having people urinating in a bottle because they didn’t want to take the time out and go to the toilet because it becomes idle time.

“We’ve got injuries, we’ve got more ambulances coming to (this) site, than any other warehouses across the country, they’ve just got an appalling record when it comes to health and safety.

“I think we’ve been lucky there’s been no fatalities within those centres, up to now.”

Ms Gearing said she is “hoping Amazon will get round the table”, while adding “I don’t anticipate they’ll be giving me a call anytime soon”.

An Amazon spokesman said in a statement to The Eye Of Media.Com: “A tiny proportion of our workforce are involved.

“In fact, according to the verified figures, only a fraction of 1% of our UK employees voted in the ballot – and that includes those who voted against industrial action.

“We appreciate the great work our teams do throughout the year and we’re proud to offer competitive pay which starts at a minimum of between £10.50 and £11.45 per hour, depending on location.

“This represents a 29% increase in the minimum hourly wage paid to Amazon employees since 2018.

“Employees are also offered comprehensive benefits that are worth thousands more – including private medical insurance, life assurance, subsidised meals and an employee discount, to name a few.”

Employees have in the past complained of high costs of getting to work and over exhaustion caused from overworking.

Amazon announced lay offs in November, in what it descried as its  annual planning process leading to role reductions as leaders continue to make adjustments

Amazon warehouse worker leaves within just eight months – that’s an unmistakable sign that Amazon’s jobs are unpleasant, to put it kindly, and that many Amazon workers quickly realize they hate working there because of the stress, breakneck pace, constant monitoring and minimal rest breaks.

Its employees work for 40 hours a week, these schedules provide a full range of benefits to our associates and eligible family members. Employees gets two ten minute breaks and one half an hour break for lunch.