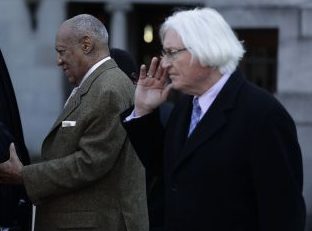 After the first public show of affection from  Bill Cosby’s wife, Camille to her husband when she accompanied a brief exchange of words with a kiss,  she took confidently took a seat in the first row behind the table of defence lawyers. She may have been assured by Cosby’s lawyers that her husband is at the edge of a victorious case because there is no shred of evidence behind the allegations against him.
That may be a consoling perspective to adopt, but the reality is that the various testimonies from his alleged victims may be all the evidence necessary if the jury believes their accounts. Evidence includes the testimony of witnesses if found credible, even though hard evidence is preferred to be independent of verbal testimony.

Independent evidence is not always easy in rape cases, and the jury can rule on the basis of verbal account, if they believe those accounts. Tom Mesereau took over, re-branded Andrea Constand  a liar who just wanted money. Her words describing the settlement with Cosby, “one of the biggest highway robberies of all time was meant to alert the jury not to trust Constand. Whether they believe
Mesereau will soon be seen.

Mr Cosby got conned, big time,” he stressed. His strength of declaration may sway jurors, but it will take a lot for them to completely disregard the moving and detailed allegations made by different women against a man previously loved by Americans across the country.
When Cosby’s other lawyer,  Kathelene Bliss. set upon Gianna Constand, she was adding her voice to the defence position that Constand consented to a sexual encounter with Cosby at his home in the Surbaban Philadelphia in 2004  branding her as “either an angry mother or a co-scammer,”  she was attempting to strip her of every bit of credibility.
She called Gianna Constant “evasive” and “phoney” for not telling people she had recorded their phone calls,  and she questioned why Gianna Constand sounded so polite on the phone.
“Listen to that tone of voice. It’s sweet. It’s the kind of voice that wants concert tickets. Is it really the voice of someone who tells you from the stand that she was so angry the day before that her eyeballs were going to explode,” Bliss said. “It’s like Dr. Jeckyl and Mrs Hyde.”

The closing performance was powerful, and dangerous in every way. Dangerous in its potential to acquit Cosby if he is, in fact, guilty, in which case, justice will not have been served. The legal position is that the judgment of the court is the facts of the case. If Cosby is innocent, then the danger for Constand is that she may face a countersuit that may be more cost;y and embarrassing for her.
Mesereau is renowned for  securing Michael Jackson’s stunning 2005 acquittal on child molestation charges
“How many lies do you need?” he asked. “You need pliers to pull the truth out of this person.”

Mesereau set out to thoroughly completely discredit Constandi, alleging that  she lied about every key issue in this case. She said she lied about being alone with the comedian., about flirting with him, about wearing sweaters Cosby have her, about how often she called him, about prior sexual contact, and about rooming with former Temple Colleague Marguerite “Margo” Jackson.
“Margo Jackson is her worst nightmare,” Mesereau says of Constand. “If Margo Jackson is believed by you, we’re out of here.”
Jackson testified last week that Constand told her in a Rhode Island hotel room that she could make up allegations against a celebrity to “get money.”  Cosby later paid her $3.4 million as part of a 2006 settlement. Condemning the payment, Msereau said :
“I call that settlement agreement one of the biggest highway robberies of all time,” Mesereau said. “She didn’t require him to say he did anything wrong. she just wanted the money.”
“He thought he was paying for peace, the attorney said of his client. “Instead he’s 80 years old and on trial for his life. That’s what he got out of it. She was a con artist.”
“This woman will say anything, she will absolutely say anything,” Mesereau later said of Constand., Defense lawyers stressed,“She’s a pathological liar.”

Mesereau stopped at nothing in her launch of an all-out courtroom assault on Constand’s credibility. She made reference to her willingness to lie, her greed, her statements to Margo Jackson – if you take all of this into account, the dead-bang evidence that this couldn’t have happened in January. If you take all of this and put it together, Mr. Cosby must walk out of here free,” Mesereau concluded.
Spread the news
Related Posts: