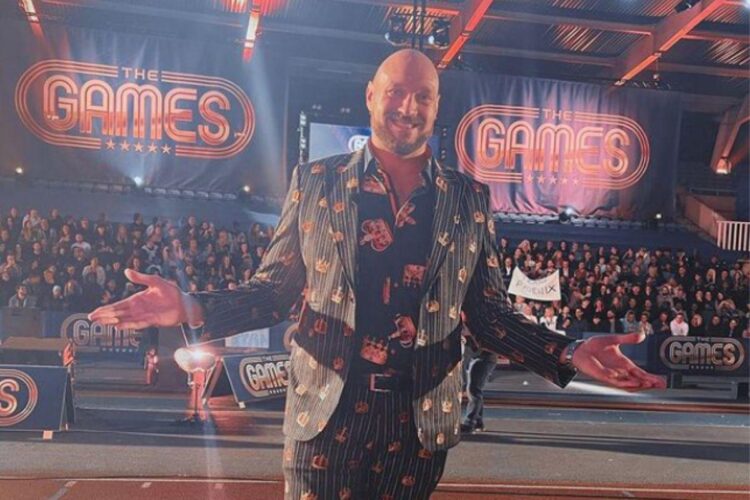 Tyson Fury said be believes when he steps into the ring, it is his destiny that he will win. The current Wbc world heavyweight champion and rated best in the world appeared as a guest on ITV’s The Games.

The gypsy king from Morecambe, made his appearance in a bold custom suit covered in crown prints, fresh off the defence of his WBC crown against Dillian Whyte, where he joined presenters Holly Willoughby, Preston-born Andrew ‘Freddie’ Flintoff, Alex Scott and Chris Kamara.

The Games  will see 12 celebrities battle it out over a week of live programming, competing in events including diving, cycling, running and weightlifting, each trying to rack up enough points to get them to the top of the medals table and crowned Champion of The Games 2022.

Blackburn Rovers’ Bradley Dack’s partner, Olivia Attwood, also featured as a contestant and said she felt “humbled” by her loss

Speaking about a line-up of celebrity athletes competing for medals on the show, Fury told his audience that he has always considered victory to be part of his destiny- a claim he has maintained throughout his career, including the days of some of his lacklustre performances in the ring.

Asked  about tips for celebrities potentially under the pressure of the occasion, said: “They key to [competing under pressure] is relaxing and doing what you’ve done in training, just taking it in and enjoying “Most of all enjoying it because then there’s no pressure. Win or lose you’re going to have a good go.”

Tyson was then asked if he ever felt pressure in a fight.

He said: “You know what, I’ve never felt pressure because I am one of those people that believes in destiny.”

“When I go to a ring to fight I believe if it is my destiny and my time I will win.

Fury has always expressed supreme confidence in his ability , long before he ever won the undisputed world heavyweight belts from Wladimir Klitschko in 2015. Confidence of victory and supremacy was one quality he always exuded; he considered such favourable outcomes to be one with his destiny.

Few subscribed to the gypsy king’s advanced claim to greatness, many critics deeming his noise to be mere hot air which would never come into fruition. With time, he has consistently defied the odds to remain an unbeaten heavyweight, now sitting at the pinnacle of the sport’s richest division.

Whilst Fury has vowed to retire as a heavyweight, he is yet to surrender his belts to the  World Boxing Council (Wbc).This week, the WBC will push him  for a firm decision on his future.

Yet, should Fury truly turn his back on the sport, whilst he will be hailed as the best of his time, his  bid for greatness will be contentious in the years ahead, without at least one or two more major challenges.

The fact Fury was the man to end Klitschko’s reign and then end the unbeaten run of Deontey Wilder, makes him an unarguable candidate for greatness in the  heavyweight division, but even his ardent supporting father John Fury knows that unless he at least risks his title against the winner of Joshua and Usyk this summer, the claim to greatness will be subjective for many years to come.

If Fury truly believes it is always his destiny to win, he must step into that ring at least one or two more times and shut every last critic up.

This week, the WBC will push him  for a firm decision on his future.

Boxing scribes abound with profound insight about what comprises greatness in a popular sport like boxing, and great fighters of old have faced every risk necessary to have their names irrefutably affirmed in the history books as great fighters of their day.

Fury has been more than an enigma, presenting sporting attributes difficult to  match let alone surmount by his many adversaries so far. his name in precisely the same breath as those discussed in the superlative tense.

Besides that, he will be remembered as the unbeatable best of his time who bowed out before his legacy could face its most rigid test against  the next best out there.