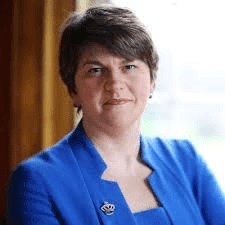 Arlene Foster  has already branded the idea of keeping Northern Ireland in the Customs Union  beyond Brexit ”crazy”, and  has also  said  that the ”EU was not interested in a negotiated outcome”.

Foster(pictured)  dissected the EU’s motive for being difficult in these negotiations after the German Chancellor  insisted during a phone call with the British prime minister that Northern Ireland would have to stay in the Customs Union forever.

Foster made clear that no sovereign government would do that, stressing the stupidity of the suggestion.

“The comments from the German Chancellor to the Prime Minister that Northern Ireland must remain in the EU Customs Union forever now reveals the real objective of Dublin and the European Union,” she said.
“For the United Kingdom to be asked to leave a part of its sovereign territory in a foreign organisation of which the UK would no longer be a part and over which we would have no say whatsoever is beyond crazy. No UK Government could ever concede such a surrender”, she said.

With such a surrender out of bounds, the most logical way forward is still being missed, but must be tracked down. It requires time and diligent contemplation, considering all potential options. The Eye Of Media.Com’s thinktank’s team have for a few weeks been assigned to dream up a workable solution to the Brexit dead end, which could include consultation . No breakthrough even in idea has so far surfaced

Brexit talks have been following the same boring cycle of a dead end over The Irish backstop . The dead end is only dead in the absence of a solution to the Irish backstop which has made negotiations over the past year or so been a absorbing journey involving egos and alter egos bent on having their way .

German minister Angela Merkel’s insistence that Northern Ireland will have to stay in the Customs Union for Brexit to work is contrary to   what  Downing Street want. Boris Johnson has said does not want a  potentially  indefinite arrangement that can luck any part of the Uk to The EU. He can’t be blamed for refusing to give in to such a ridiculous idea .

Other ideas in the way of changing the geographical location of checks away from the Irish boarder has been  aimed at  solving the problem and get Brexit going. Those ideas have got a  Brexit  deal going nowhere. The EU have no incentive to propose a deal because they want to keep the Uk tied to them., but the best minds in Britain must crack a deal it will be impossible for the EU to refuse without exposing a deliberate degree of  inflexibility.

A deal that nobody in their shoes will have an excuse to reject must be thrown their way otherwise we will keep chasing a deal we won’t find.