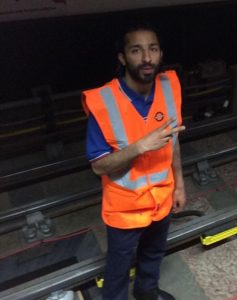 The revelation that one of the London Bridge terrorists worked at an underground train station us a blow to the security services.

Pictures released of 27 year old terrorist Khuram Butt working in an underground station makes our skin cringe. We must count ourselves lucky that the monster did not blow up the tube and inflict far more loss of life than he did at London Bridge.

The security services must be in some kind of shame for allowing a man known to them to have a paid Job in the London underground. Many questions now need to be answered like why none of the intelligence service were alarmed, or if they were even aware of his stint at the underground.

An estimated 3,000 terrorists are still lurking around somewhere in the UK. The security services have a duty to find out what jobs they are doing and monitored closely.

Butt was based at Westminster tube station, and had access to tunnels under the House of Parliament. Evetually sacked for lack of attendance, the fact he had appeared in an extremist documentary was not one of the reasons for terminating his job. Had he continued to work there , we will never know how many more people would have been dead.

Brits may have been fortunate that Butt may not have fancied dying on the London underground himself, or he may simply not have advanced yet into a full blown suicide killer. But the fact he could slip away so easily, shows just how easy it may be for others to slip away too.