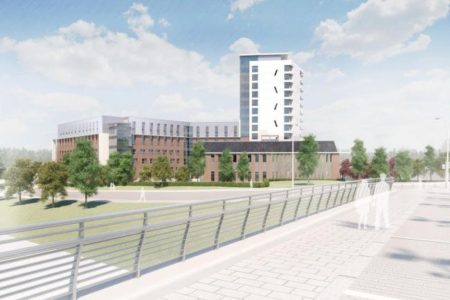 A Scottish property developer has signed an impressive £500 million joint venture with a US company to build student accommodation across the UK.

Glasgow-based Structured House Group (SHG) say the agreement with Chicago-based Harrison Street Real Estate will result in the building of 5,000 apartments over the next five years.

SHG will source land and is expected to be granted planning permission, as well as developing and operating the accommodation with sites potentially in Glasgow, Dundee, Edinburgh, Manchester and Liverpool.

The first joint project on the site of Scotway House is already underway in Glasgow and expected to provide approximately 400 student beds.
The development includes plans for two restaurants, a library and study rooms. It is expected to create about 300 jobs, SHG said.

Scotway House is the first project by SHG and Harrison Street Real Estate
Craig Inglis, chief executive of SHG, said he was delighted to have agreed on the joint venture.

He said: “This is a major moment for SHG and a great example of a Scottish company attracting major investment, giving us the scale and ability to perform on a global platform.

“We have spent the past 12 months negotiating the terms of this agreement and it’s very exciting, finally to have passed the line.

“This joint venture will significantly boost the amount of accommodation and living space for students, as well as bringing jobs and prosperity to every city we enter.

“We look forward to working with Harrison Street and to growing our partnership over the next five to 10 years.”

Robert Mathias, head of international at Harrison Street, said: “We are excited to enter into a long-term partnership with Structured House Group to bring much-needed, high-quality student accommodation to the city of Glasgow and other attractive markets