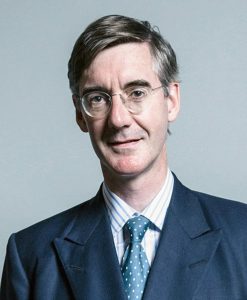 Tory MP, Jacob Rees-Mogg was caught up in a scuffle at a university campus. The cause of the scuffle has not been established, but sources from the university told theeyeofmedia.com that the combatants had consumed too much alcohol and had a disagreement over one of the topics of the evening

Video footage of the fight was posted on social media featuring the embarrassing but entertaining scenes at the University of the West of England, in Bristol.
In the video, he is seen restraining people as an angry confrontation between audience members and protesters threatens to turn violent.

Mr Rees-Mogg was at the university to give a talk organised by the student Politics and International Relations Society when a group of about six masked protesters barged into the lecture theatre shortly after his talk began. They hurled abuse at the MP, shouting “bigot”, “fascist” and “racist”.

One video showed the MP remonstrating with a group of intruders, their faces covered, at the back of the lecture theatre. Shouts of “free speech” can be heard in the clip.

Chris Dixon, 23, who was in the audience, said: “As soon as they came in, Jacob Rees-Mogg walked straight up the stairs, walked straight up to them to have a conversation with them and try to diffuse the tension. They were just screaming in his face.

“Then a bunch of guys jumped up straight away to back Jacob Rees-Mogg so he wasn’t there alone. I thought he was going to get punched in the face or something, the way they were at him. They obviously hadn’t come to talk.”

Rival groups became embroiled in a murky scene of pushing and shoving each other as the MP appealed for calm before getting caught up himself. Security presence was disappointingly absent until about 8 mins into the unrest

Mr Rees-Mogg resumed his speech after university security ejected the protesters. Police were called but are not thought to have made any arrests.

The ticketed event for the MP’s talk was a sold out event. The event’s page promised “a chance to talk to an experienced parliamentarian about the issues of the day, what it’s like to be an MP and how you can get there”.

“It’s extremely intimidating for any MP who travels alone to an event to be treated like this,” she added in a tweet.

The Tory MP for North East Somerset stepped in to separate rivals as onlookers call for them stop.

Mr Rees-Mogg, who has been tipped as his party’s next leader was invited to speak at the University’s Politics and International Relations Society, theeyeofmedia.com heard.

Conservative MP @Jacob_Rees_Mogg was caught up in a scuffle that broke out while he gave a speech to students in Bristol. pic.twitter.com/qEC7jCFEmt

BBC Somerset reporter James Craig said “Just a few minutes after he started speaking, a group of protesters came into the back of the lecture theatre and started shouting anti-Conservative rhetoric at Jacob-Rees Mogg very loudly, a group of them, and sort of trying to shout him down, basically.

“But rather than halting the event, or ignoring them, Mr Rees-Mogg approached them and walked up to the back of the theatre where they were and tried to talk them down.

“But at that point, various other members of the audience got involved as well and that’s when this scuffle… happened and a lot of people got involved.

“It looked to me like Jacob Rees-Mogg himself got pushed and shoved, although he insists he wasn’t.

“But it was a really aggressive and unexpected scene.”