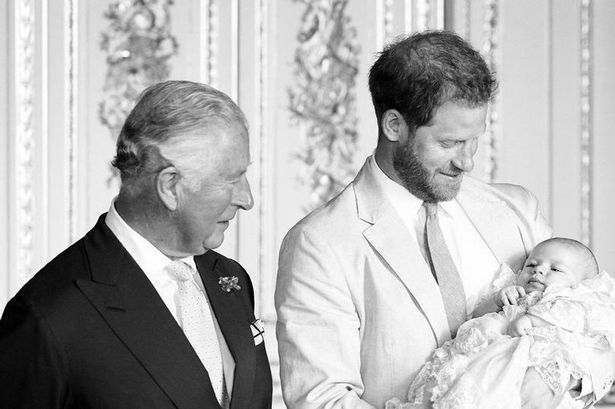 Prince Harry’s latest attack on his father Prince Charles, has been driven by the recent omission of his wife in the birthday celebration of Archie, The Eye Of Media.Com has concluded.

Much was made of the omission, though some analysts believe Prince Charles was expressing an anger he had for both Prince Harry and Meghan Markle, but couldn’t leave his son out of the picture.

In leaving Meghan out of the picture, the media immediately picked up on it, and quickly reported this. It meant Prince Harry had the extra uncomfortable discussion to have with his wife, which could only have worsened matters.

Mental health analyst, Deon Vernhoven told The Eye Of Media.Com: ”you have to remember that every criticism of Meghan in the press, whether justified or not, will impact Prince Harry’s mental health to some degree, and manifest itself in different ways.

‘The picture Prince Charles posted of himself with his son and Archie can be seen as a public  rejection of his wife Meghan Markle, which when circulated in the press, will only add to Prince Harry’s inner sadness and bitterness against his father.

‘It is perfectly logical to assume that the public posting of that picture on his son’s birthday, greatly annoyed him, and his latest declaration to break a ”genetic pain” is very likely to have been triggered from that picture.

Another analyst who spoke on the condition of anonymity, said:

”Prince Harry sees his father as rejecting and disapproving of his wife openly, and says he sees a pattern between what is happening to Meghan Markle and his late mother, Princes Diana. The main difference is that Prince Charles was not with his mother in the final years of her passing, but in Prince Williams’s head, he believes the royal family should be confronting the press, which may be a lot to expect of them”.

Some media outlets suggested that Prince Charles decision to leave Meghan out of the Archie’s birthday picture was deliberate, a speculative conclusion that could only have driven Prince Harry more and more mad with his father. His father is clearly mad at him too.

Harry’s full-on criticism against his family members in the U.S podcast clearly reflects his deep pain at what he sees as an ongoing pain constantly triggered by a media that cannot get enough of column inches, as the royal feud expresses itself on the press at every opportunity.

The picture posted by Prince Charles may have inflamed tensions, but he would have been very angry with Meghan for various things she said un that interview, some standing out more for him than others.

The heart felt pain for Prince Harry is unimaginable, though many people in the UK hold the view that the Duke Of Sussex caused his own pain by going on the Oprah Winfrey show to air out his dirty laundry.

The Duke and Duchess Of Sussex said they were driven to make the revelations and allegations because of the way they were treated by the palace.

Meghan Markle old Oprah Winfrey that ”the firm” were actively perpetuating falsehoods about her, citing an example in which the British newspaper tabloid published a false story that she made Kate Middleton cry, when it was the other way round.

Prince Harry and Meghan complained  to Oprah about their experiences

This alleged falsehood is one of the very few allegations about we have seen no attempt to debunk by their many critics who are upset with the pair for their attack on the Monarchy.

The media barrage against Prince Harry and Meghan Markle has been an expression of anger and disgust against the couple’s tell all interview, about which a number of inaccuracies were highlighted. Those alleged inaccuracies presented them as liars to the British public.

Angry journalists and the public may not have considered whether everything possible was done to avoid the final disaster that drove the pair away from royal duties. The fact they went out to attack the royal family publicly riled a lot of people.

Most notable among the claims was Prince Harry’s allegation that he was told his unborn child will not be given a title of a prince, with no reason provided, only for Meghan Markle to yield to the suggestion by the Oprah Winfrey that it was because of the skin colour of her child.

The claim that his son would be denied the title of a prince was later shown to be wrong, the reason this misinformation occurred, remaining unknown.

Prince Harry may know more than he has said about the incidence, but in the eye of the British public, it is he and his wife who came out looking bad from that particular profound claim.

Also clear to Prince Harry is that he is unlikely to escape the vengeful attacks of the press, with whom he has been locked in legal battles, and what he must by now have accepted as psychological warfare.

Prince Harry  in that interview, recalled a time when 70 Mps gathered to campaign against the media attack on Meghan Markle, stating that he was disappointed that strangers were prepared to fight for him, but his family were not.

It takes no scientific expertise to work out that this feeling of being let down”, which he expressed, has grown more intense, even as the royal family will more than likely have no incentive to try to stop the press from laying into him for an interview that did not sit well with them.

Chances are not very high that the royal family would have had the power or influence to stop members of the media from criticising Prince Harry and his wife after the series of bombshells they dropped during the world interview, but prince Harry is convinced that the royal family could have intervened in 2019 and 2020 when negative stories about his wife were flying in the press on a regular basis.

Prince Harry would have a valid reason for anger if the claims were false as he insists most were, but not if they were true.

Apart from the stated false report in which Meghan Markle was falsely said to have made Kate Middleton cry, Prince Harry and his wife haven’t singled out any the many articles in the press reported false stories.

Perhaps the couple thought if they mentioned some, and not others, it would leave them exposed to accusations that the others were true.

True or not, Prince Harry clearly wanted his father to step in and caution the media, in the years of Meghan’s first pregnancy, and now.

The complication is that if Prince Harry did not like Meghan for any reason, he would have no motivation to intervene. Ig her general conduct in the palace was not right at all, would be turned off.

The potential issue of race will always be hanging in the air, but the full facts depend on all that truly went on in the palace.
Complete healing is a long way away, and can only be achieved by an honest discussion with all concerned, if that’s possible.