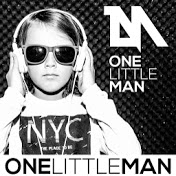 A young boy remixing the songs of rag’ n’ bone , known as one little man is having an impact on radio stations across Europe and other parts of the world.

He started a project in October 2016 in which he took on the challenge of introducing a new song every two weeks. Using a mixture of House/EDM/Pop, One Little Man’s goal is to present music from a different angle. The project aims to gives their audience a chance to see life through the eyes of a child as he reflects the essence of love, hope and music.

Altogether 6 original songs were released (all available on iTunes, etc.) with one track was remixed by UK DJ, Dee Washington, plus One Little Man produced a pop/house version of Rag’n’Bone Man’s track Human. Representatives of one little man contacted the eye of media.com, requesting us to promote his music on our internet radio-the eye of destiny radio.

According to Natalie Janz, the project was started by a brother and a sister, whose identity she oddly says is still unknown, yet who write and sing all their songs. The young boy’s representatives appear to be hiding his identity, probably to protect him, being a young child. On their 5th release called “I NEVER KNEW”, one little man’s younger sister is the singer. Natalie Janz told the eye of media.com, ” being a new and independent project, it is very exciting to see radio stations all over Europe playing One Little Man’s songs. I NEVER KNEW and HUMAN are the most played and have even made it into several radio charts.

The real identity of one little man is being kept secret for reasons best known to the team. It may be to protect him at his young age, but he makes a very impressive case for his project on a youtube clip sent to the eye of media.com.

Rag ‘n’ Bone achieved the best breakthrough act at this years brit awards, and it remains unclear whether he collaborates with one little man at all, or if indeed he is aware of the remixes he does of his hit song ‘Human’. ‘I’m only human, yes I am, don’t put the blame on me’ has been making waves in between television shows in the UK and is now widely known in many circles. The song’s lyrics and the beats that go with it has a strong appeal that promises to go far. One little man has a talent that will go far, and those whose music he remixes can thank him for promoting their track even further.

One little man’s remix has been given the green light to play on our internet radio as from Saturday(tomorrow) and will be played at least three times weekly, spreading the good work of the little man. Maybe one day the identity of this little man will be known so he can be celebrated too.