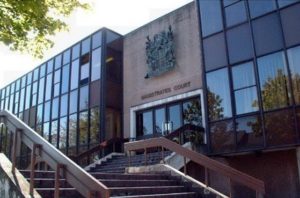 A man in his forties charged with murdering his son and daughter and the attempted murder of their mother, must have been mentally ill.

That’s the only explanation why a man would kill his family so brutally. There are obviously other influential factors to this terrible crime, but only a mentally ill person would go ahead with such an evil crime against his family, no matter the level of provocation.

46 year old Edris Mohammed was interviewed by detectives on Tuesday night about the deaths of his family members after his release from hospital. Mohammed was  treated for burns  he suffered in a car fire which he is believed to have started.

The murder suspect was discovered in the burning vehicle in Newcastle-under-Lyme, Staffordshire,  a few hours after a fire at the children’s house in Holland Road, Birmingham, in October. Mohammed is believed to have murdered his family after suffering from deep depression and some mental health issues, the eye of media.com heard. The act of killing one’s own family is a very disturbing and sad thing, and evidences a deep rooted problem in the mind of anyone who commits such an offence. Every action has an underlying motive and cause, and the life and history of Edris Mohammed is a very strange, awful, and complicated one, Nothing excuses murder, but a whole set of aggravating forces sometimes sparks a deadly and irreversible plot like murder.

Both children were found in their home in the early hours of 28 October after the blaze, and were pronounced dead in hospital. An inquest heard that neither child’s death was a result of smoke inhalation or burns. Forensic tests were continuing to establish the cause of death.

Edris Mohammed To Appear In Court

More details of the case will be heard when Edris Mohammed eventually appear at Walsall magistrates court later, according to police. The kids were very young, and the murder is a sad and hard reminder of the extent to which little children are reliant on the sanity and rationality of their parents in many respects. Irresponsible parents impact the mindset and many times, the future of a child. IN the same manner, parents with a high propensity to do crazy things, including murder, automatically doom a child’s chances from the start. It is one of the reasons the development and nurturing stage of a child is of paramount importance because left to their own devices, many will turn out to be drug  addicts, robbers, murderers, even of their own children.

Last month, Stephen Muncaster, the uncle of lotto lout, Michael Carroll, shot and killed his own wife at their home in Norfolk. He eventually killed himself too. Police believe Edris Mohammed was trying to kill himself in the burnt vehicle when he was discovered and saved from himself in order for him to face justice. There are people in this evil world who are prepared to kill others and then kill themselves too, as has been seen too many times in America- the world capital of murders and suicide.

A man who will kill his own family is every parent’s nightmare for their child, who wants their daughter to settle with a potential murderer and suicidal man? No woman enter a relationship with a man expecting that one day he will end their life or the life of their kids, yet many monsters with this high propensity to go over the edge and cause a life time disaster actually exist.
Edris Mohammed had clearly had enough of life, something had tipped him over and he just felt he had to take the whole family with him. Family situations and tensions can sometimes be so complex with twists and turns that are just not compatible with some individuals. Many factors can enter the mix, like drugs, debt, alcohol, infidelity, problem children; a cocktail of all can be disastrous in many cases. Especially, if you have a character in the family with other serious issues already present before a fresh list come to exacerbate an already bad situation.

Since Edris Mohammed survived the fire, his life will be hell if he is convicted of murder, as he will have the burn marks on his face to remind him of what brought him to jail. The 46 year old’s plans was certainly for him to
end up dead , not in jail where he will be compelled to contemplate his crimes for decades, and suffer any nightmares that go with it. Why would a man kill his children, I have always wondered? It has happened in Britain a few times before, this is not the first time. Sometimes the killer of their children cannot stand the fact that the children take sides with one party to a relationship during arguments. Children are very vocal and do not hold back with their views in the middle of a heated argument between mummy and daddy. Some could say hurtful things, even at a young age. Other times, some parent killers may just really regret that they had the children in the first place, like in instances where one parent does not want the child, but another does. When the child grows up, every bad thing they do may be amplified in the mind of the rejecting parent.

Some unwanted children during pregnancy have turned out to be a blessing in society and to their parents, whilst others have been a nightmare. However, children are children, and the duty is on parents to influence their children positively by creating a good environment for them and not add to the natural difficulties that accompany childhood. That’s why an adult is the parent, but unfortunately too many parents are children in adult bodies.