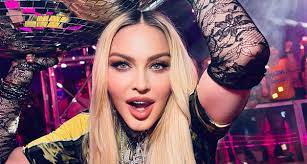 Pop sensation,  Madonna 64, will be performing at London’s O2 Arena on Saturday, October 14 as she kicks off the European leg of the tour- one of a 35 date world tour.

The ground breaking clip culminates with comedian Amy Schumer daring the global superstar to go on tour and perform her four decades of chart-topping hits.

The 35-city global tour will kick off in North America on Saturday, July 15 at Rogers Arena in Vancouver, BC with stops in Detroit, Chicago, New York, Miami, and Los Angeles.

She’ll then make her way to Europe where she will hit 11 cities throughout the Autumn, including London Barcelona, Paris, and Stockholm, among others.

“I am excited to explore as many songs as possible in hopes to give my fans the show they have been waiting for,” states Madonna.

Described as a one-of-a-kind experience, Madonna will appear alongside special guest Bob the Drag Queen a.k.a. Caldwell Tidicue across all dates on the global tour.