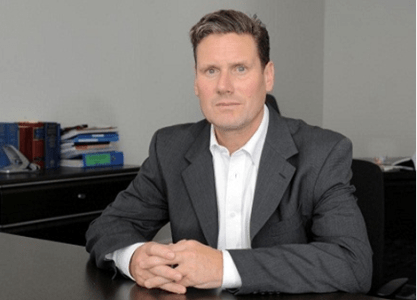 Labour leader Sir Keir Starmer has said he will quit if given a fine by Durham police for breaking lockdown rules, in a clever  bid to win voters hearts.

His announcement was echoed by Deputy leader Angela Rayner, who also confirmed she would step down if fined.

The opposition leader sought to set a high bar for political office by publicly declaring his readiness to resign if police find that he broke the law during lockdown period, and fine him as a result.

Starmer, who has been under pressure after police announced a probe into an event in April 2021, when he had curry and beer at an MP’s office during an election campaign visit, is presenting himself to the public as an honourable man whp will not cling to power if he is found to have broken the law.

The question is whether Starmer has some information that assures him that he would not be fined in the circumstances at hand. His willingness to risk his entire political career on police finding is linked to the appearance of hypocrisy that has accompanied his calls for Boris Johnson tp resign in the wake of the widely frowned upon partygate scandal.

Sir Keir has insisted rules were not broken and Labour says it has evidence showing it was a work event.

Culture Minister Chris Philp has interpreted the Labour leader’s vow as an attempt  to “pressure the police into clearing him”, which he called “deeply inappropriate”.

The police investigation could last up to eight weeks. Starmer has frequently called fror Boris Johnson to resign over partygate and has long tried to build the responsible figure for a future prime minister.

Sir Keir Starmer has been a prominent critic of Boris Johnson’s government, attacking the prime minister when he suffered a rebellion by backbenchers of covid laws which eventually relied on an overwhelming vote by Labour to put it through. Johsosn’s government eventually reversed the rules in the wake of partgate scandal, removing all covid restrictions, include vaccine passports which was at the time mandated in clubs and public places.

Keir Starmer , whose party made strong gains in the recent local elections, now faces a bit of a leadership test of integrity. Given his legal background, it could well be one already thoroughly analysed in advance.

The event under investigation took place at the constituency office of City of Durham Labour MP Mary Foy, where Sir Keir drank beer and ate curry, while lockdown restrictions were in place.

There was an exemption for “work purposes” – and Labour have said Sir Keir was eating “between work demands”.

The party says it has “documentary evidence” that people worked before and after the meal on the night in question.

A source said the party had evidence Sir Keir’s team worked until 01:00, as first reported by the Guardian.

Say nothing and be politically crippled for up to two months, while the police decide what to do.

A former director of public prosecutions, steeped in the law, who called for the prime minister and chancellor to resign for breaking the rules, unwilling to confirm what he’d do if the same thing happens.

Addressing the police inquiry on Monday, Sir Keir said he had “always followed the rules” and outlined how Covid rules had prevented him from offering support to his father-in-law when his wife’s mother died.

“Barely a day has passed when we haven’t agonised over that decision,” he said.

He reiterated his insistence that he had not broken the rules and suggested his opponents “didn’t believe it themselves” but were simply trying “to get the public to believe all politicians are the same”.

“I’m here to say they are not – I believe in honour, integrity and the principle that those who make the laws should follow them,” he added.

“If the police decide to issue me with a fixed-penalty notice, I would of course do the right thing and step down.”