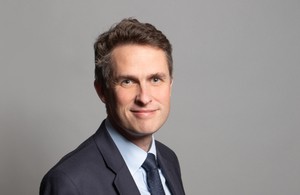 Education Secretary Gavin Williamson has supported a decision by  Oxford University College not to take down a statue of British imperialist, Cecil Rhodes.

Mr. Williamson described the decision by the college was “sensible and balanced”.

He added: “We should learn from our past, rather than censoring history, and continue focussing on reducing inequality.”

Mr. Williamson’s support for the decision as balanced would produce mixed emotions from different quarters of the public. Those bothered and affected by racism and its imperialist past will not consider it at all balanced, but most brits will have no problem agreeing with Mr. Williamson.

If indeed focus is directed at reducing inequalities in an observable way, Mr. Williamson’s argument will make sense.

A commission set up to examine the figure’s future said the “majority” of its members supported its removal.

However,  Oriel College  cited costs and “complex” planning processes. as its reasons for not taking the statue down.

Campaigners called for the statue of Rhodes to be removed, stating that the 19th Century businessman and politician in southern Africa, represented white supremacy and was rooted in colonialism and racism.

Oriel’s governing body expressed a desire to remove the statuelast June, adding that it was supported by the independent commission appointed to examine its future and Rhodes’ legacy.

The college said the “challenges and costs” of removing the stature in terms of heritage and planning consent could run into years with no certainty of the outcome.

“In light of the considerable obstacles to removal, Oriel’s governing body has decided not to begin the legal process for relocation of the memorials,” a statement added.

“Instead, it is determined to focus its time and resources on delivering the report’s recommendations around the contextualisation of the college’s relationship with Rhodes, as well as improving educational equality, diversity and inclusion amongst its student cohort and academic community.”

Any decision to move the statue would require planning permission from Oxford City Council, Historic England and the secretary of state for local government, Robert Jenrick.

The city council’s leader Susan Brown had initially urged the college to apply for planning permission, but the commission noted any application would pose “complex challenges” since the government’s policy over controversial historical figures is that they should be be “retained and explained”.

Ms Brown said she was “deeply disappointed” the college had decided to “backtrack” on its decision to remove the statue.

“For people in our city this was the most important action that Oriel College could have taken to show an acknowledgement of the discrimination of the past and they have failed to act,” she said.

The council leader said she feared the measures taken by the college would “not be enough to inspire confidence without this important symbolic step” and added it was “well past time for all institutions to tackle the difficult issues of colonialism and discrimination”.

Lord Mendoza, provost of Oriel College, said the college was “fully aware of the impact our decision is likely to have in the UK and further afield”.

“We understand this nuanced conclusion will be disappointing to some, but we are now focused on the delivery of practical actions aimed at improving outreach and the day-to-day experience of BME students,” he added.

The college said the majority of submissions to the inquiry backed the retention of the statue but the commission still decided to recommend its removal.

It said it would accept a number of the report’s recommendations immediately. These would include a new tutor for “equality, diversity and inclusion” and additional training for academic and non-academic staff in race awareness.

The governing body said it agreed to a virtual exhibition to “provide an arena for contextualisation and explanation of the Rhodes legacy”.

The statue sits above a doorway on the front of the college’s Rhodes Building, which faces Oxford’s High Street.