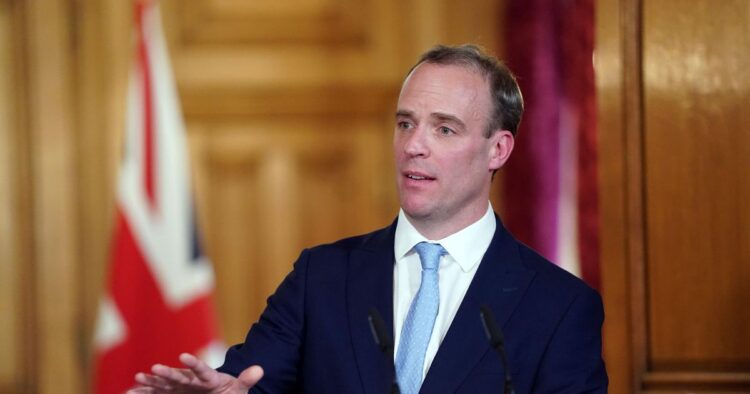 The discipline exercised by the vast majority of the British people must continue, Dominic Raab said as he spoke of a long warm Easter weekend ahead.  Raab made it clear that the lockdown imposed on the Uk will not be eased anytime soon, until the scientific evidence and medical advice suggests it is safe to relax them.

Raab, who is standing in for the hospitalised Prime Minister Boris Johnson, said the worst thing the country could do was “take its foot off the peddle”.

In his daily Downing Street press briefing on Tuesday,  the Foreign Secretary said it is too early to consider lifting the strict rules. Raab said: “In terms of the review, we are not at that stage yet. We will take any decision when the time is right, based on the facts and the scientific and medical advice.

“Our number one and overriding focus right now is on conveying the key message which is that everyone needs to keep adhering to this guidance.

“There is a long Easter bank holiday weekend coming up, warm weather and we understand people are making big sacrifices to follow this guidance.

“The worst thing now would be to take our foot off the peddle, to ease up on that and risk losing the gains that have been made.

“It is absolutely critical that people keep up that discipline and the vast majority will. We hope everyone will follow that example.”

Mr Raab says they will take review when they have evidence measures of working, not at that stage yet.Professor Whitty adds they need to take a large impact of things into account.  The First Secretary said  we need to keep an eye on the peak of the virus first

Raab’s comment s come  on another day of heart breaking news for the British public, a dad of two who spent six days in hospital on maximum oxygen battling the coronavirus, spoke of the sorrow in hearing a man cry for his family members, calling them by name one by one. Craig  Farley Jones from Manchester said after the man’s family  eventually attended the hospital in masks and gowns to say their last goodbye’s.

Farley said he would never forget it as long as he lives.

The UK reported a further 854 fatalities on Tuesday as the death toll surpassed 6,000. Thirty-eight of those deaths were in the North East. The Government’s chief scientific officer Sir Patrick Vallance said the number of new cases “could be moving in the right direction” but it would not be clear “for a week or so”.

He said: “It’s possible that we’re beginning to see the beginning of change in terms of the curve flattening a little bit. We won’t know that for sure for a week or so.

‘There is not that big upswing of growth that we talked about that the beginning. There is a fairly steady increase in numbers – it is possible that we are beginning to see the beginning of change in terms of the curve flattening a little bit.’

A heat map yesterday revealed that most people in the Uk have been observing the lockdown, and the police has been dispersing and fining groups who have been breaching it. It is the right action and one in everybody’s best interest. The longer people break the lockdown rules, the longer the lockdown may remain.