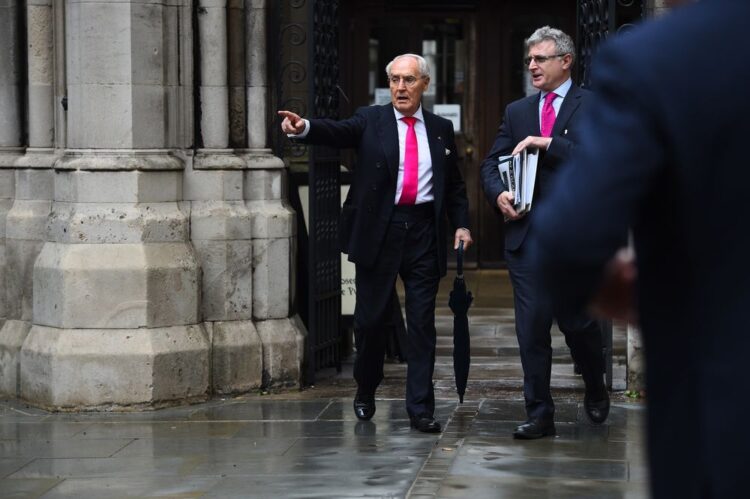 The Daily Telegraph owner-Sir Frederick Barclay- behaved reprehensibly, and will  pay a massive £1oom in settlement to his estranged wife.

Representatives of the media argued in court for publication, saying it was important that the whole of the judgment be published so the public could understand how the court reached its conclusion as to the size of the award. However, those applications were denied for privacy reasons.

Mr Justice Cohen handed down the judgment in March for financial remedies orders following an application by Lady Hiroko Barclay against her husband, the billionaire Telegraph owner Sir Frederick Barclay.

Frederick Barclay amassed a lucrative business empire with his late twin brother,  and was ordered to pay his former wife 100 million pounds ($139 million) as part of his London divorce.

The pay out ranks among the highest to be made public by U.K. courts, where large settlements between the rich and famous are generally hashed out behind closed doors. It’s still someway behind the record £450m.Hiroko Barclay had initially sought as much as 120 million pounds for the breakdown of the couple’s 34-year marriage.

Mr Justice Cohen said Barclay, 86, had breached a court order to sell a luxury yacht and produce the proceeds, and had instead sold the vessel and kept the money for himself.

“Part of [Barclay’s] available assets included a luxury yacht which was on the market for sale,” the judge said in his ruling on Wednesday. “I made orders intended to control the sale and the use of the proceeds. He completely ignored those orders, sold the yacht and applied the equity for his own use. I regarded that behaviour as reprehensible.”

The judge ruled against the publication of the substantive judgment and that a summary of his findings would have been allowed but was effectively overtaken by this ruling.

The court heard that aspects in the judgement which was critical of Sir Frederick Smith  were ‘highly personal’. However he said this was not a case of the husband ‘getting away with it’ and that the starting point was that proceedings were conducted in private. It was noted that Sir Frederick had paid almost all of his wife’s £1.8m costs and although criticisms were made of ‘aspects of the presentation’ of his case, these were largely ‘acts of omission rather than commission’, and had not significantly affected the outcome.

‘He is a public figure who should have been aware of the potential consequences of disobedience of court orders and his behaviour in the proceedings should not be allowed to pass completely under the radar,’ said the judge. ‘The provision of this judgment properly and proportionately satisfies the public interest.’

He added: ”The principal criticism that I made of (Sir Frederick) related to his treatment of orders made for the production of documents and answers to questions,” he said, in the shortened ruling published on Wednesday.

“Those orders were made specifically in the context of (him) seeking to argue that loan notes to which he was entitled and which constituted the vast bulk of his wealth were not likely to be honoured, in full or in part, by reason of an alleged absence of liquidity in the underlying family businesses.”

“I made orders intended to control the sale and the use of the proceeds.

“He completely ignored those orders, sold the yacht, and applied the equity for his own use.

“I regarded that behaviour as reprehensible.”

The ruling set out that Lady Barclay had sought an award of £120m to be paid in two tranches, following the end of a marriage dating from the mid-1970s. He had offered 40% of the remaining trust loan notes due to him, plus half of the receipts from equity in the family home and yacht.

Lady Barclay had expressed a wish for her husband to be exposed for his conduct. The angry woman told the court she wished to exercise her right of freedom of expression and did not wish to be silenced about the way her former husband had behaved before and during the litigation. She argued that the public had a ‘right to know’ about his conduct, which removed his right to privacy.

Sir Frederick argued that he was not a public figure and had never courted publicity. He also expressed concerns for other members of the family not party to proceedings. He said the fact that the Telegraph had taken the lead in publishing the financial details of others was immaterial.

They also owned the Ritz hotel until they sold it last year to a Qatari billionaire. Frederick Barclay and his daughter Amanda sued the relatives of David Barclay over the bugging of private conversations at the five-star hotel.

The brothers mostly lived in a castle on the island of Brecqhou in the Channel Islands. They bought the 32-hectare (80-acre) island for almost £3.5m. The Mayfair estate agent ad had described it as impressive, highlighting features such as a stone manor house, a private harbour and a helipad. Ownership also came with “tax free status”.

Representatives of the media argued in court for publication, saying it was important that the whole of the judgment be published so the public could understand how the court reached its conclusion as to the size of the award.