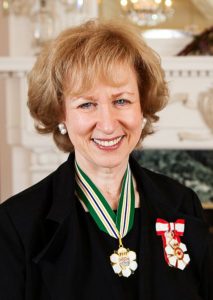 Describing it as “demeaning” for women newsreaders to wear such sleeveless outfits Kim Campbell, who served as Canadian PM in 1993, faced criticism after she argued that bare arms “undermine credibility and gravitas”.

The 70-year-old highlighted a blog post by Dr Nick Morgan, a public speaking coach, who claimed a study found people wearing less clothing were seen as “dumber”.
Writing on Twitter, Ms Campbell said: “I am struck by how many women on television news wear sleeveless dresses – often when sitting with suited men.”I have always felt it was demeaning to the women and this suggests that I am right.
“Bare arms undermine credibility and gravitas!”

However, the former Canadian prime minister faced a barrage of criticism by many on social media. Ms Campbell was branded ‘out of touch’ by a number of social media users.

In his blog post, Dr Morgan said the study’s findings showed that “the less clothing you have on, the dumber we’re going to take you to be”.
“Think about what this means when you put on that sleeveless dress, women, or that expensive, cool-looking casual t-shirt, men,” he said.
“It means you’re going to look less brilliant than if you covered your arms,” Dr Morgan added.
“Apparently, we humans are pretty simple creatures. If you show up in front of us with skin exposed, we’re going to think about your body. If you’re wearing lots of clothing, we’re going to think about your mind.”
Ms Campbell’s remarks drew criticism on social media, with one Twitter user branding her “out of touch with reality” and another telling her: “Stop policing women for physical appearances.”

Canadian MP Michelle Rempel tweeted: “I firmly believe in the right of Canadians to bare arms.”
Some people shared a black and white photo of Ms Campbell in which she showed her bare shoulders while holding lawyers robes in front of her.
Others pointed to former U.S first lady Michelle Obama who often wore sleeveless outfits.

I know she’s not a journalist but the former First Lady and American lawyer has rocked sleeveless outfits during several interviews – and NO one would doubt her credibility. pic.twitter.com/34BwC9rp6I