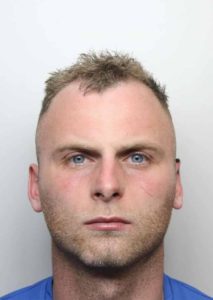 A window cleaner who stole nearly £1,400 from the purse of a partially-sighted elderly customer has been jailed.

Lee McGowan, 28, was working at the Bradford home of his 80 year-old victim, who had been a client of his for the previous two years, on the afternoon of May 23 last year.

Selfish McGowan came into the property to collect his £6 payment, but could not resist the roll of bank notes in the woman’s purse when he set eyes on it.

Prosecuting, Ms Duffy told Bradford Crown Court that McGowan had deliberately ”targeted his victim on the basis of vulnerability”. He distracted the woman by telling her he had cut his finger, and asked her for a plaster. She retrieved some tape from a drawer in the hallway, and McGowan put it on his hand. He left, but around ten minutes later, the woman, who was reliant on a zimmer frame and wheelchair, realised her purse had gone.

She called her Age UK befriender and a neighbour, who said McGowan had left the address without cleaning the windows of any of the adjoining properties

Prosecutor Catherine Duffy told Bradford Crown Court that the woman, who lived alone, had a total of £1,375 in her purse as her daughter had withdrawn some money for her during a visit a few days earlier.
Cops eventually arrested McGowan from his address on Aireville Terrace in Burley-in-Wharfedale.
They searched his bedroom and van, and seized a phone, which McGowan said he had bought the previous day.

The thief said he had bought the iPhone 6S for £260 using money given to him by his mother.
In a victim impact statement, the woman said the incident, in which she also lost a “sentimental” picture of her late husband, had left her with feelings of “sleeplessness, stress, and fear.”

Miss Duffy said McGowan, who pleaded guilty to theft, had “deliberately targeted his victim on a basis of vulnerability.”
Giles Grant, mitigating, said his client had “lost his business and his reputation” as a result of the offence, which he admitted was “particularly mean.”

He said McGowan was currently on an “onerous” community order for an offence of controlling and coercive behaviour, and asked that it be allowed to continue.

Referring to the request that the suspended sentence being allowed to carry on, the Recorder of Bradford, Judge Jonathan Durham Hall QC, said: “Any sensible observer would say that is a nonsense. This is a serious offence and the courts cannot tolerate such a mean, nasty, low attack.”
Imposing a 20-month jail sentence, Judge Durham Hall also ordered that McGowan compensate the woman for the full amount stolen.

He said:  “That lady will not be left out of pocket because of your mean, selfish act.” The pathetic window cleaner has now destroyed his name and reputation completely all because he did not have an ounce of humanity in him when he stole money belonging to an old lady.