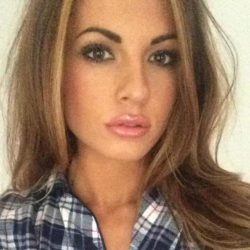 Stacey Flounder has gone for another convicted player, Bolton’s Gary Mandine. Mandine was jailed for 18 months for assaulting a man in a club.

Mandine claims to be a changed man , describing his jail sentence as a ” blessing in disguise”. Meanwhile, Johnson is aware of the developing relationship and said to be “choked ” by the news.

The former Sunderland player recently said he wished he had raped the 15-year-old girl he was convicted of messing about with. Johnson was unsuccessful in a recent appeal of his conviction and has been captaining a football team in jail, where he rightfully belongs.

Flounders has said to like Mandine a lot, unsurprisingly, she is not willing to loose her lifestyle of being the footballer, Adam johnson’s girlfriend. She would have been living in relative comfort and would have to drop the standards of her lifestyle by loads if she went for an ordinary bloke with average wages.

This woman obviously is a high aimer, not willing to sacrifice the standard of her daughter’s life and hers, and can anyone really blame her? She must hope not to be stung by Mandine in any way, and it is her duty to make sure he is the right man in her life at his point in time.

The one drawback any relationship between Mandine and Flounders will have is him taking somebody else’ s girlfriend instead of finding his own fresh woman.