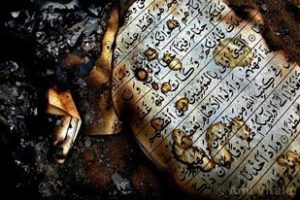 A Slovakian woman has caused outrage after she filmed herself ripping apart a Quran, laughing , and urinating over it.

She then poured petrol over it and laughed as she mounted an abusive threat against the Muslim community whom she branded as parasites.

The outrageous act reported by the UK Mirror newspaper is being investigated by police . In a shocking rant, she said:

” I will hunt you all step by step no matter if it’s a woman, child or man. I will bump anybody who will be in my way.  I do not care about criminal complaints, it will not stop me. I have a message for everybody including police.  Nobody will stop me”.

The incidence will enrage Muslims in her community and add to the growing feeling of Islamaphobia in the world.

This woman is clearly demented to do such a stupid act and threaten all Muslims without fear or concern of the police. She can’t be right in the head and should be caught.

Muslims have collectively been under attack because of the terrorist attacks in the world today.

Terrorists have created a very bad name for Muslims, but this does not mean individual Muslims who oppose such terrorism should be subjected to this level of attack.

Many Muslims are decent aw abusing citizens, but unfortunately have to face this kind of fear and danger.

A danger caused by individuals who are of far more concern to any society than the Muslim citizens they detest. A person. who acts the way this woman did and then films herself is so stupid that her stupidity overrides any point she is trying to make.

In posing a danger to Muslims on film, she loses a danger to herself. That’s how stupid she is!