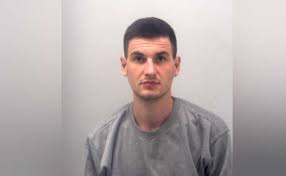 A man who killed  his friend in a fight with one punch over a woman the pair shared, has been jailed for 12 years.

Radu Ciobanu, 24 was sentenced on Friday for killing James Avis, 35,  after they fell out over a woman they had both been sleeping with. Both men were aware of the other’s sexual engagement with the girl, until things came to heads when only one of them could have her on the occassion.

Avis had recently split up with his girlfriend, Shona Williams, when he began seeing the woman who we will refer to as Destiny. Destiny had also been sleeping with Ciobanu for a while leading up to that fateful day, setting up the scene for an inevitable rivalry where all three were situated within the same four walls, getting high.

On September 25,  at just after 22.20pm, whilst millions of boxing fans were watching Anthony Joshua disappointingly get outboxed by  new world heavyweight champion,Oleg Usyk, Ciobanu was  doing his own boxing outside a ring, in what would turn out to be tragically fatal.

The Eye Of Media.Com heard that the pair had been drinking for consecutive days when the girl each of them had been sexually involved with came between them, and was forced to select one of the lads for what was expected to be a good time, all night long.

Avis had consumed 70  tablets of pregabalin,  been smoking cannabis, and consumed several cans of alcohol, a witness at the property told this publication. They had been in the company of about five others for a few days, drinking happily.

A friend of the pair, who insisted on anonymity said:”Avis had taken about 70 pregabs and had been drinking all day for a couple of days. We had all been drinking for a few days, but Avis had consumed a great deal of alcohol.  He and Radu began arguing over the girl, and they were both told  to calm things downthat this girl is a bxxxx, not worth arguing over”, but they did not listen.

‘It got to a point when the girl was asked to choose who she wanted to sleep with that night, and she chose Ciobanu.

Feeling undermined by Destiny’s choice, Avis made comments Ciabanu did not like, and was headbutted, leaving the whole sitting room  covered in blood.

‘He offered outside, and the rest is history. They were told that the fight wasn’t worth it, our source confirmed. The destiny of both men wouldn’t end well.

‘Avis was in no state to fight, I can only guess he was so out of it that he didn’t recognise he was making a very poor decision in going outside. Ciobanu was drunk too, but not in as bad a state as Avis”.

When the pair went outside, the girl  over whom they were fighting, followed them downstairs and recorded the fight on her mobile phone. The sad video is hard to watch.

The footage reveals Ciobanu setting upon Avis with a few blows, Avis turning his back on him in the process.

During a momentary pause in the attack when Ciobanu takes a breather, Avis stops and can be heard saying, ‘I am not a fighter’, signalling a wish to  recind his drunken agreement for a physical confrontation. Ciobanu responds: ”you are not a fighter, but you come[ungrammatical] outside”.

He then launches a punch to the head of a defenceless Avis, who drops to the ground and hits his head on the edge of the pavement.

Destiny can  subsequently be heard on the footage, saying : ”you said you wanted one on one, in’t”. It was a sad scene to watch on footage.

When Ciobanu realised Avis was unresponsive, he called the ambulance, who attended the scene, but were unable to save his life before he passed away.

Ciobanu, who stands at about 6ft 7 inches  to Avis’s 6ft 2 inches, was arrested and charged with manslaughter. The girl who left the scene. was eventually tracked down by police last week,  in the process recovering the footage of the incident from her mobile phone, which was shown to the judge.

In a twist of fate, Avis had been staying at the property  at Hainult Avenue inhabited by two friends, after police bail conditions prevented him from contacting  his girlfriend, directly or indirectly, following a complaint of assault she made against him.

He was therefore  prohibited from being on Hainult Road, where his girlfriend resided, but felt compelled to breach those orders by staying at  an alternative  property on the same road where music and booze often flowed freely.

Unfortunately, Avis overindulged, lacking the much needed judgement to refrain from a physical confrontation he was in no state to participate in. If only he had still been with his girlfriend, or had his own accommodation, he may still be here today.

A friend of Avis at the property said they had tried to get  Avis housed prior to this incidence by both Harp and Housing solutions , but both attempts were to no avail.

‘If he had accommodation of his own none of this would have happened. We tried everything to get him housing, but nothing worked. It’s so sad, Avis was a good soul, but wasn’t happy with no stable base of his own.

Ex girl friend, Shona Williams said: It is such a shame he had to go like this.  He sometimes drove me mad, but I miss his personality and free spirit. It is a sad thought that this all happened over another girl, a part of me feels bad over all this.

He should have had accommodation of his own considering he suffered from anxiety, depression, and bipolar. Someone like him shouldn’t have been without a roof over his head.

Harp and Housing Solutions have been contacted to explain why they wer eunable to fetch him accommodation, given his known condition and situation.