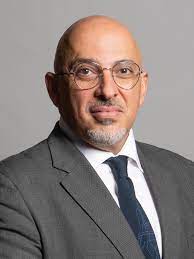 Speaking to LBC on Monday morning, Nadhim Zahawi said the protests targeting schools were “abhorrent” and would “not be tolerated”, later stating that anti-vaxxers who target schools should be arrested by police.

Health secretary, Sajid Javid, and the Labour leader, Keir Starmer have called for the use of exclusion zones – known formally as public space protection orders which are administered by local authorities – to protect schools from protests.

Zahawi said on Monday: “I’d rather have the police deal with it.” Asked if he wanted to see arrests rather than exclusion zones, he said: “Absolutely. Because the moment you start giving them the space to think that they are somehow being prohibited … [the home secretary, Priti Patel] has promised me that the police have got all the resources they need to be able to deal with [them].”

He continued: “The anti-vaxx protesters should not be going anywhere near a school or a pupil or a parent or a teacher. If they do, the police will and can take action against them.”

He said: “I have spoken to the Home Secretary about this and she has reassured me that the police have all the resources they need to deal with this.

“Local government, of course, are also working with schools … if anybody feels threatened by these anti-vaxx protesters, they should report them and they will be arrested.”

The best way to deal with the anti-vaxx protesters … is to always make sure that we deliver the evidence and the data and be positive about vaccines, he said.

Whilst expressing a disinterest in introducing exclusion zones at school gates, he expressed an interest for local government to  have ”buffer zones” outside schools, adding that he would support those “if they deem it necessary”.

On exclusion zones generally, he said: “I’d rather have the police deal with it.”

In response to a question on whether he wanted to see anti-vaxx protesters arrested, rather than exclusion zones, he said: “Absolutely. Because the moment you start giving them the space to think that they are somehow being prohibited…

“[Priti Patel] has promised me that the police have got all the resources they need to be able to deal with [them].”
The most comfortable, stylish, flexible and lightweight winter boots on the market.

Opposition party leader Sir Keir Starmer said it was “sickening” that those against vaccinations were demonstrating at school gates.

The vaccine has been a divisive topic in the Uk, as in many other countries, with anti-vaxers convinced that world governments have a sinister plan to coerce populations to be vaccinated in order to control them or tamper with their DNA.

Parents against the vaccine have expressed anger that children in schools do not necessary need parentql consent to obtain the vaccine, after the Uk government said that a competent pupil can decide to be vaccinated against the parent’s wish.

Allowing underage children to be vaccinated without parental consent has alarmed many anti-vaxers,  whilst the government considers the importance of being vaccinated to outweigh opposition by  objcting parents.

Public spaces protection orders (PSPOs) can be used to disperse people from a public area and have previously been used to move on protesters outside abortion clinics, or to allow police to confiscate alcohol in certain spaces.

Downing Street has said it is “never acceptable for anyone to pressurise or intimidate pupils, teachers or the wider school community.