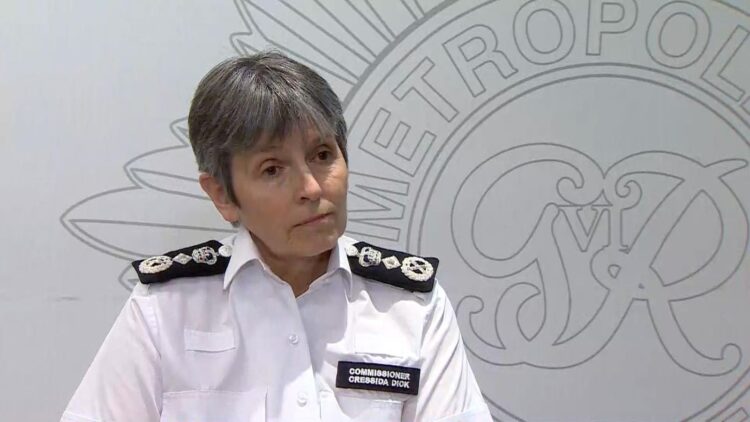 Victims of police injustice are calling for the prime minister to replace Met Police Commissioner Dame Cressida Dick when her contract comes to an end in April.

Dame Cressida is currently negotiating  a two-year extension of her contract, but some of the controversies that have dogged her career  are opening up the wounds now.

However, in a damning  open letter to Boris Johnson, first reported in the Daily Mail, the group of complainants  said that after “decades of equivocation and inertia”, the Met must be held accountable for its failings and Dick should not be handed the two-year extension to her term in office, which she was offered on Wednesday.

Leading the campaign against the Met Chief are big names, including, Lady Lawrence, the mother of Stephen Lawrence, and Lady Brittan, the widow of the former Conservative home secretary Leon Brittan.

The signatories also demand an overhaul of the Met’s senior team, “urgent and long overdue” reform of the police complaints system and a shake-up of the Independent Office for Police Conduct,  branded “unfit for purpose”. The severe criticisms are a stain on the reputation of the Met Police, long known for corruption and cover -ups, contradicting the very principle of natural justice.

Other aggrieved signatories include Alastair Morgan, whose brother Daniel was murdered in 1987 – the killer remains unidentified and a report into the case accused the force of institutional corruption and sparked denials from the Met’s leadership – and the son of D-Day Army officer Lord Bramall, who was falsely accused in 2014 of child sexual abuse by the paedophile and fantasist Carl Beech.

Corruption and incompetence in the police force is not limited to the Uk, but exists in many parts of the world-some worse than others. It would be false to suggest that competent policing and integrity is absent in every police force in the world or the Uk. Evidence of efficient  and professional policing in the Uk and abroad are many, but corruption should never be found in the police force.

BBC broadcaster Paul Gambaccini, who was arrested as part of Operation Yewtree, and the former Conservative MP Harvey Proctor – another victim of Beech’s false allegations – are also signatories, as is Sir Edward Heath’s biographer Michael McManus. The former prime minister was another public figure smeared by Beech.

He said letter’s signatories are linked by their common experiences of police malpractice over a number of years, and they have come up with no reason why the chief commissioner “who has failed and failed and failed” should be given an extension.”There must be other chief commissioners outside of London who’d be prepared to do the job and do it a great deal better, with integrity and without cover-up after cover-up.

“I personally believe she should have resigned months ago. I’m not fighting for myself, I’m fighting for the future so that it won’t happen to anyone else.

“And it could happen to someone else if changes are not made at the top of the Metropolitan Police. No-one has been held responsible for the problems Operation Midland [the Carl Beech allegations investigation] created.

“The commissioner even got a damehood – quite outrageous.”

Mr Proctor said he received an apology in person from Lord Hogan-Howe, Dame Cressida’s predecessor, who was the Met’s chief commissioner while Beech’s allegations were treated as “credible and true”, but he rejected an apology from Dame Cressida because “her words and actions did not go hand in hand”.

“I call on the prime minister and the home secretary to meet with all seven of us to hear our experiences – and I would defy them then to continue with any extension of her remit.”

In February 2017, Dame Cressida became the first woman to lead London’s force since its inception in 1829. Her appointment was criticised at the time by the family of Jean Charles de Menezes, who was wrongly shot dead during an operation she led in 2005.

Now she is coming to the end of a five-year contract, Home Secretary Priti Patel has consulted with London Mayor Sadiq Khan and Downing Street over the decision to ask her to stay on for two more years, according to media reports.

Protesters demonstrate outside Scotland Yard over the treatment of people by police at the Sarah Everard vigil
Dame Cressida resisted pressure on her to resign in March when the Met came under scrutiny over the handling of a vigil held in memory of Sarah Everard, the marketing executive murdered by former Met Police PC Wayne Couzens.

The force has faced repeated accusations of racial bias in its use of stop-and-search powers and was hit with criticism over the security of Wembley stadium during the final of the Euro 2020 championships.

Since the start of the year, both Prime Minister Boris Johnson and the home secretary have publicly backed Dame Cressida.

A Home Office spokesperson said: “The appointment of the Commissioner of the Metropolitan Police Service is a formal process which will be confirmed in the proper way.”