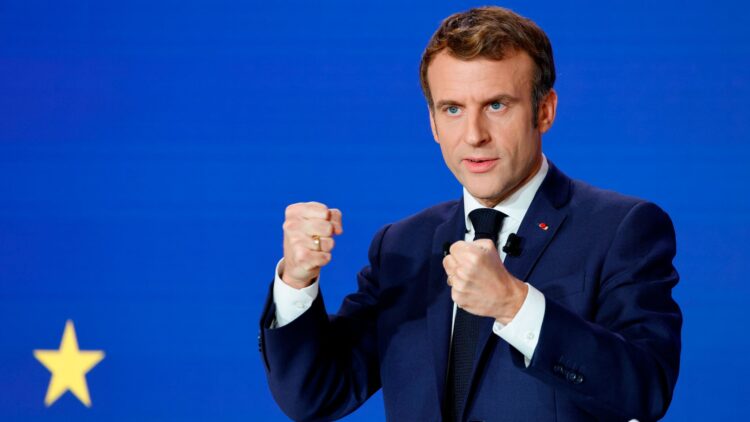 Unvaccinated tourists from the Uk will not be allowed into France , the French government have made clear, after permitting fully vaccinated  travellers  to enter  France as from Friday morning if they have evidence of a negative coronavirus test taken within 24 hours of departure.

Emmanuel Macron, 44, sparked fury with a divisive comment last week when he said he wanted to pxxx off the unvaccinated in France, and his new policy to UK unvaccinated residents is an extension of his vindictive ideology.

Considered a political bully, the French  ruler, whose leadership is bordering on tyranny given his  dictatorial speech has also expressed a strong desire to go for  foreign propaganda media that spread disinformation, particularly on French soil.

During his annual new year speech before France’s press corps, the French president said: “Online platforms, influencers, and also citizens who sometimes take a considerable place in the public debate precisely through these new platforms … must have a framework of responsibility that is yet to be built,” he said Tuesday during the annual new year speech before the country’s press corps.

The objective of rooting out spreaders of disinformation is itself noble, but Macron has not shown himself a noble leader with his gangster like attitude.

Other countries allowing only fully vaccinated residents into their country include Belgium, Canada, Switzerland, and a number of others.

Jean-Baptiste Lemoyne said on Thursday that  people arriving from Britain would also no longer need to self-isolate on arrival in France, but proof of a negative Covid-19 test taken no more than 24 hours before departure would still be demanded.

“People will once again be able to travel for leisure between France and the UK, and to go skiing,” he said.

France tightened restrictions on travel from and to Britain on 18 December in an effort to curb the rapid spread of the Omicron Covid variant, requiring vaccinated and unvaccinated people to show a “compelling reason” for travel such as a family or health emergency.

The rule, which in effect limited entry from the UK to French and EU nationals and British citizens resident in France, was later eased to allow people in “for the pursuit of an economic activity requiring an on-site presence that cannot be postponed”.

The rules also required all arrivals from the UK to present a negative PCR or antigen test taken within the previous 24 hours and to quarantine in France for seven days, reduced to 48 hours if they can produce a new negative test.

Thursday’s decision also ends to a controversial rule barring British nationals resident in other EU countries travelling through France to reach their homes. The transit ban was temporarily suspended on 30 December after UK citizens living in Belgium and Germany were refused entry to France.

The strict travel measures were also imposed during what analysts see as a post-Brexit breakdown of trust between the British and French governments over a host of issues from migrants to fishing.

By mid-January, the French government aims to introduce a vaccine pass that will make inoculation mandatory for anyone wanting to go to restaurants or attend indoor events.

The travel industry has expressed relief at the easing of the travel ban.

Julia Simpson, president and CEO of the World Travel and Tourism Council (WTCC), said: “WTTC welcomes the reopening of French borders to UK travellers. Once a variant is endemic closing borders is pointless and only damages livelihoods especially in travel and tourism one of the hardest hit sectors during the pandemic.

The insistence on only double vaccinated travellers into their countries is to prevent potential infections, but the demand for an accompanying negative PCR test exposes an inherent contradiction  in the policies  because it confirms the possibility of those group of people still infecting others in the event of contracting the virus.

All is left to speculation, but without the required inoculation, its aurevoir to Uk visitors insistent on not being double vaccinated.