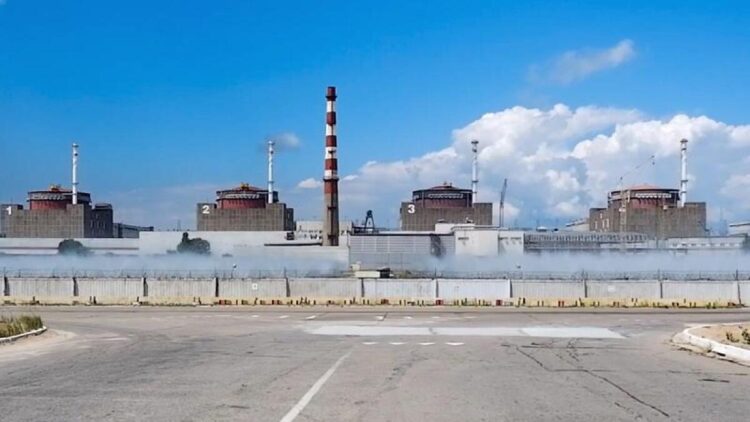 The United Nations (UN)  has expressed alarm of more shelling of Ukraine’s Zaporizhzhia nuclear power plant, with Ukraine and Russia both pointing the figure at each other for the attack.

UN nuclear watchdog officials have been unable to inspect the plant amid the dangerous attacks being launched from close proximity to its location.

Both parties said there were 10 hits on the plant’s administrative office and fire station on Thursday.

On Wednesday, foreign ministers from the G7 group of industrialised nations said Russia must immediately hand back control of the plant to Kyiv.

The US, meanwhile, called for a demilitarised zone to be established around the plant. “Fighting near a nuclear plant is dangerous and irresponsible,” a state department spokesperson said.

The facility and its surrounding area in central-eastern Ukraine saw shelling last week, with Russia and Ukraine also accusing each other over that attack.

A view shows the Zaporizhzhia Nuclear Power Plant in the course of Ukraine-Russia conflict outside the Russian-controlled city of Enerhodar in the Zaporizhzhia region, Ukraine August 4, 2022. REUTERS/Alexander Ermochenko

Ukraine’s interior minister warned on Thursday that Ukraine had to be ready for any scenario at the Russian-controlled Zaporizhzhia nuclear power plant that has been hit shelling, including evacuating people from the area.

Ukraine and Russia-installed local officials blamed each other for a new volley of shelling on Thursday at the nuclear power plant – Europe’s biggest – which lies in southern Ukraine.

“The plant is as of today not only in the hands of the enemy, but in the hands of uneducated specialists who could potentially allow for a tragedy to happen,” Interior Minister Denys Monastyrsky told Reuters in an interview.

“Of course, it’s difficult to even imagine the scale of the tragedy which could come into effect if Russians continue their actions there,” he said.

Ukraine has in recent days warned of the risk of a Chornobyl-style nuclear disaster over the worrying issue.

Ukraine says Russia has turned the site into a military base, launching attacks from there, knowing that Ukrainian forces are unlikely to retaliate. Mr Zelensky stated that such an accident would be tantamount to Russia using its nuclear weapons without conducting an actual nuclear strike

.
So far, UN nuclear watchdog officials have been unable to inspect the plant.

In a statement on Thursday, Ukraine’s nuclear agency Enerhoatom said that “Russian invaders again shelled the Zaporizhzhia plant and territories near the nuclear facility”.

It said an administrative office near the welding area was hit and several radiation sensors were damaged. There was a small fire on some nearby grass, but no injuries.

Enerhoatom added that the fire station located near the plant was also targeted.