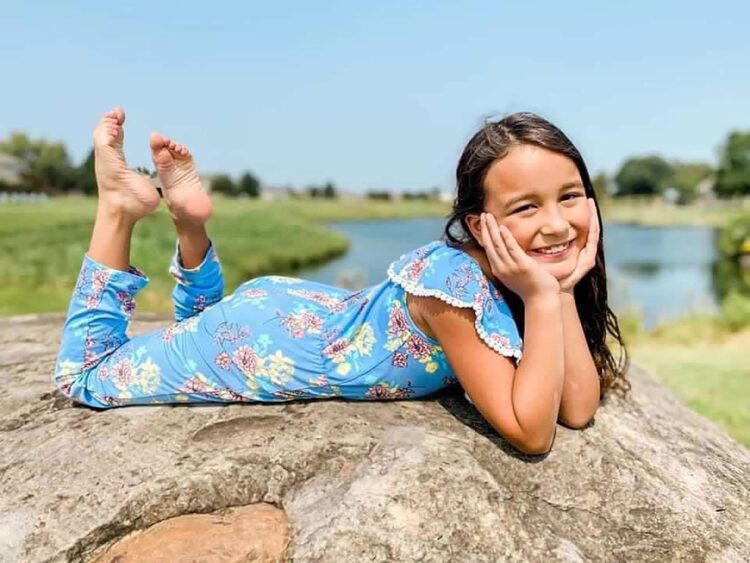 A  five-year-old from Louisiana  was reportedly forced out of her kindergarten class at a religious school because her parents are a same-sex couple.

Emily and Jennie Parker  were informed by school officials at the Bible Baptist Academy in DeQuincy, Louisiana, during a meeting with the school’s director and a pastor that their same-sex relationship did not follow the teachings of the school and that they would need to find a new school for their daughter, Zoey(pictured).

Young Zoey is completely in the dark about the dividing views across religious lines on gay relationships, and it is not know whether their disappointed parents explained the issues to her.

Jennifer Parker, 31, told local news outlet  KPLC : “We got called into the principal’s office for a meeting, they informed us that Zoey wouldn’t be able to go to school there anymore because of our lifestyle choices”.

Emily Parker, 28, said that the meeting took place only two days before the school year started. During the conference, she and her wife  were informed that as a religious-based school, the school would teach students that marriage was between a man and a woman.

The Parkers recently adopted Zoey, who is Jennie’s niece, after her father died in a workplace accident in September 2020.

“She lost her father, she lost her mother and now she’s losing her school which she loves very much,” said Jennie to KPLC.

Zoey had previously attended pre-school at Bible Baptist Academy, where she had bonded with a number of other pupils there and made friends.

The couple had not researched the school’s policies on gay couples when they enrolled their child in the school, and it is unclear why the school  did not initially hand out their full policies of admission to the couple, or either of the parents if one of the parents had initially brought Zoey to the school.

Homosexuality and gay marriage has been a longstanding controversial issue in secular circles, and in many churches which differ in their ideology of same sex couples. Some churches are totally opposed to the idea, but others more open to it.

The couple also said they have received several offers from other local Christian schools for Zoey to start her kindergarten year.

“It’s a blessing in disguise,” said Jennie to KPLC. “We have an opportunity to bring her to a school which is a little closer and it’s a new opportunity for her to make new friends.”

Bible Baptist Academy published a statement on their dismissal of the Parkers, writing, in part, that the school is “committed to instructing and living in accordance with the teachings of Scripture.”

It added: “As a Baptist academy, we are also committed to provide an environment that is consistent with the beliefs that we hold. We want our students to not only know our beliefs, but we want them to see them as well. Regarding personal relationships, we hold that those relationships, whether in dating or in marriage, should be between a man and a woman.”