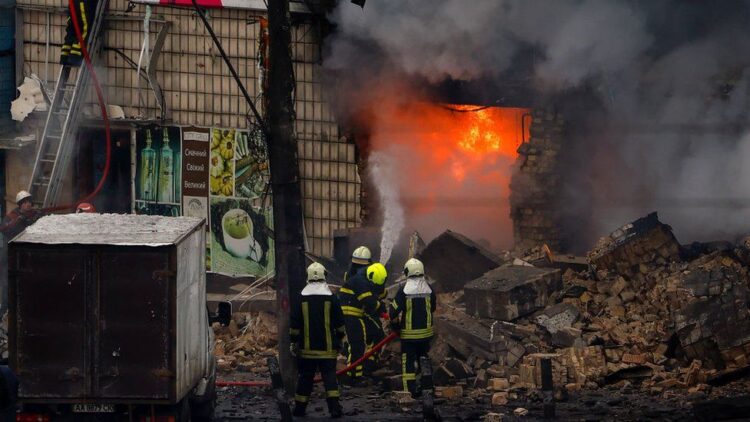 Ukraine’s western city of  Kyiv is without power, following a wave of Russian missiles launched in the country.

Critical infrastructure in Kyiv was also targeted, and the city’s officials said three people died in the attack.

Across the border, Moldova also reported “massive” blackouts, despite not directly being directly hit.

“As a result of the attack, a two-story residential building was damaged. Three people died and six were injured,” Kyiv’s military administration said on Telegram.

The attacks have left all of the Kyiv region without power and water supply. The city of Lviv in western Ukraine was left completely without power, said Mayor Andriy Sadoviy.

“The whole city is without power. We are waiting for additional information from energy experts,” Sadoviy said on social media, warning that there may also be interruptions to the city’s water supply.

“Massive blackout in Moldova after today’s Russian attack on Ukraine’s energy infrastructure,” Spinu said on Twitter. “Moldelectrica, TSO (transmission system operator), is working to reconnect more than 50 percent of the country to electricity.

Moscow has recently increased strikes on Ukraine’s energy infrastructure, leaving half of the country’s power grid in need of repair.

Ukraine’s national power grid operator has said the damage sustained by power generating facilities in recent weeks has been “colossal” and warned that Ukrainians could face long power outages over the winter months.

Early on Wednesday, an air-raid alert was issued across Ukraine, followed by reports of explosions in a number of locations.

In the capital Kyiv, parts of the city have been let without water and completely without power, Mayor Vitali Klitschko said.

Lviv mayor, Andriy Sadovy, said children had been taken to shelters with their teachers – and urged parents not to pick them up until the alarm was over.

Shortly before the fresh reports from Kyiv and Lviv, officials said southern Ukraine had come under renewed assault.

The governor of the Mykolaiv region warned of “many rockets” arriving from the south and east.

In the nearby Zaporizhzhia region, a newborn baby was killed when a missile hit a maternity unit, emergency services said.

Russia was blamed for that attack but is yet to comment on any of Wednesday’s alleged strikes.

Ukrainian President Volodymyr Zelensky accused Moscow of “acts of terror” and said he had asked his UN ambassador to request an urgent meeting of the Security Council.

Deputy prime minister Andrei Spinu wrote on twitter that the attack on Ukraine’s energy infrastructure has caused a “massive blackout” across Moldova.

Within a few hours power was restored in much of the capital, Chisinau, where a third of the Moldovan population lives.

Energy policy analyst Sergiu Tofilat said that because Moldova and Ukraine were connected to the European grid in March, one of the connection points on the power line between Moldova and neighbouring Romania shut down automatically if Ukraine was hit to protect the system: “We reconnect once Ukraine has assessed the damage.”

In response to the outages, Moldovan President Maia Sandu said Russia had “left Moldova in the dark”.

“Russia’s war in Ukraine kills people, destroys residential blocks and energy infrastructure with missiles…” she wrote on Facebook. “But the electricity supply can be restored. We will solve the technical problems and we will have light again. All state institutions are working in this direction.”

Kyiv Mayor Vitali Klitschko said Wednesday that “one of the capital’s infrastructure facilities has been hit” and there were “several more explosions in different districts” of the city. He said water supplies were knocked out in all of Kyiv.