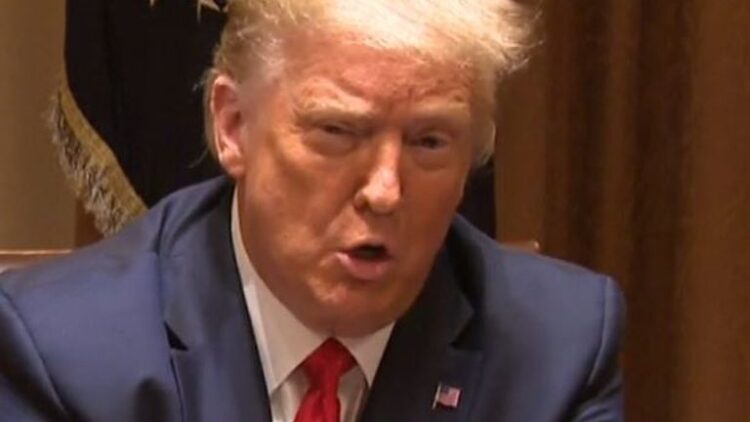 The ruling means now means a grand jury can be enforced to subpoena for the records.

Central to the case is whether the Trump Corporation artificially inflated the value of Trump’s properties in order to get the best possible loans. Investigators also want to know whether the company presented different values to tax authorities

Trump has called the efforts to probe his tax records as ‘a fishing expedition’ and ‘a continuation of the witch hunt – the greatest witch hunt in history.’

The ruling also means that the grand jury investigation into alleged hush money payments and other issues will no longer be hampered by Trump’s fight to keep the documents secret. The documents will be subject to grand jury secrecy rules that restrict their public release. The ruling was issued without comment or dissent.

The Supreme Court, voting 7-2, rejected the Trump’s broad claims of immunity from a state criminal subpoena last summer, in which he was seeking his tax returns and said that as president he was not entitled to any kind of heightened standard unavailable to ordinary citizens.

The justices sent the case back to the lower court so that the president could make more targeted objections regarding the scope of the subpoena.
In October, a federal appeals court said “there is nothing to suggest that these are anything but run-of-the-mill documents typically relevant to a grand jury investigation into possible financial or corporate misconduct.

Trump’s personal lawyers then took the case back to the Supreme Court, urging the justices to put the lower court ruling on hold while the justices considered whether to take up the appeal.

“The subpoena is geographically sprawling, temporally expansive, and topically unlimited –all attributes that raise suspicions of an unlawful fishing expedition,” William Consovoy wrote. “Even if disclosure is confined to the grand jury and prosecutors,” he said “once the documents are surrendered” confidentially “will be lost for all time.”

In August, prosecutors suggested in court papers they may be looking into tax fraud, insurance fraud, and falsification of business records. That suggestion came in response to Trump’s contention that the probe was focused on payments to adult-film star Stormy Daniels and another woman.

Trump’s accounting firm, Mazars USA, isn’t contesting the subpoena and has said it will comply with its legal obligations

Trump told the Supreme Court he will suffer “irreparable harm” if the materials are turned over. “Even if the disclosure of his papers is limited to prosecutors and grand jurors, the status quo can never be restored once confidentiality is destroyed,” his lawyers said in court papers.

Vance said the year-plus delay has already hampered the investigation.

Trump “has had multiple opportunities for review of his constitutional and state law claims, and at this juncture he provides no grounds for further delay,” Vance argued. “His request for extraordinary relief should be denied, and the grand jury permitted to do its work.”

The New York Times in September published an analysis of at least two decades of Trump’s closely-guarded tax records, reporting that he paid just $750 in federal income tax in 2016 and in 2017.